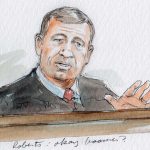 Sometime on Thursday, Chief Justice John Roberts will cross the street from the Supreme Court building to the Capitol to begin presiding over the Senate impeachment trial of President Donald Trump. This week’s activities will be somewhat ceremonial—the chief justice taking an oath himself, then swearing in senators for their special role as jurors (or as a “court,” as Chief Justice William Rehnquist ruled in President Bill Clinton’s 1999 impeachment trial).

The real action is set to start next week, after the Martin Luther King Jr. Day holiday. Throughout the court’s current term, the chief justice has received daily reminders of his potential role as the impeachment process inched along. Perhaps he was warming up for the role when, back on November 13 (the day impeachment hearings began before a House committee), Roberts was officiating the court’s annual charity dodgeball game. 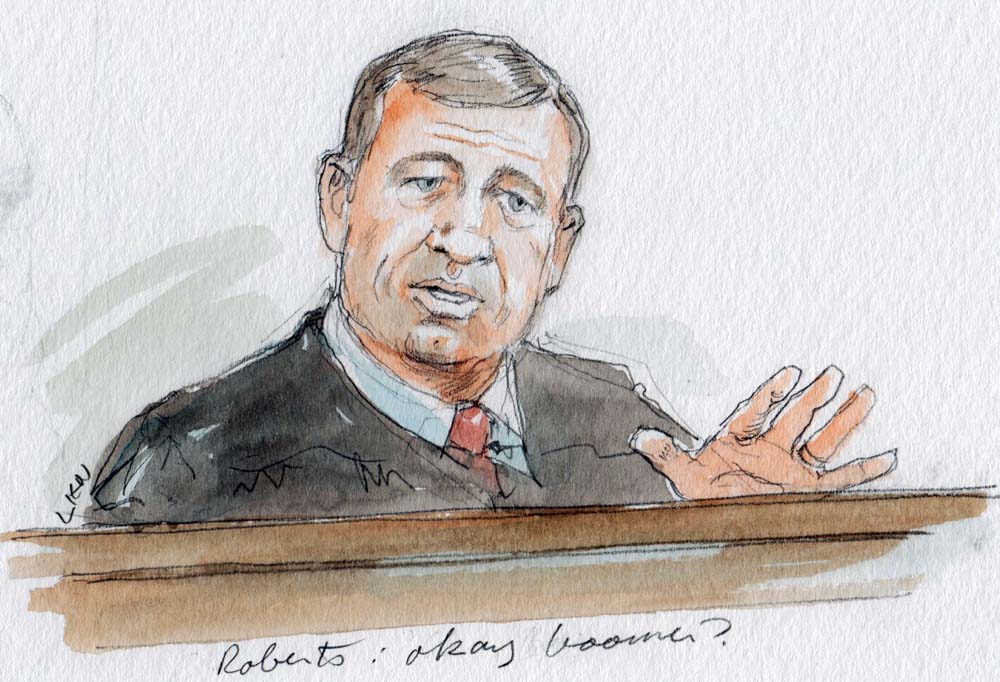 The Balls & Strikes team name, of course, evokes Roberts’ statement at his confirmation about judges as umpires merely applying the rules.

We all can recall his famous line, “Nobody ever went to a charity dodgeball game, or an impeachment trial, to see the chief justice presiding.”

Meanwhile, Roberts has been tending to his day job, without betraying any hint of distraction by the impeachment trial that is soon to begin. That was evident in court Wednesday as the justices took up a potentially dull case of statutory interpretation involving the Age Discrimination in Employment Act that resulted in a lively argument in which Roberts had the best line.

In Babb v. Wilkie, the question is whether the federal-sector provision of the ADEA, which says that job actions for those 40 or older “shall be made free from any discrimination based on age,” requires plaintiffs to prove that their age was the “but-for” cause of the challenged action.

The “free from any discrimination” language does not apply to private-sector or state and local employers, who already have the employer-friendly “but-for” causation standard thanks to several Supreme Court rulings.

The case involves Noris Babb, a pharmacist for the Department of Veterans Affairs who was around age 50 when she alleges that age discrimination was a factor that denied her promotions.

Roman Martinez, representing Babb, engages with several justices about how much of a role age must play in an employment decision before the federal-sector provision would be violated.

Roberts wonders whether Martinez really believes that age must be a “significant factor” before invoking a phrase that has only recently entered the lexicon.

“Let’s say in the course of the, you know, weeks-long process, you know, [there is] one comment about age,” the chief justice says. “The hiring person is younger, [and] says, you know, ‘OK, boomer’ … once to the applicant.”

The courtroom erupts in laughter. A dozen or so high school students in the second and third rows of the public gallery perk up and nudge each other over this au courant phrase. Some internet sources say the riposte has been around for several years, but it clearly gained traction with a 2019 TikTok video responding to a baby boomer who had complained online about millennials and Gen Z having “Peter Pan syndrome.” The retort has also been lobbed in the chambers of the New Zealand Parliament.

Roberts, whose 1955 birth places him squarely in the 1945-1964 baby boom generation, continues, essentially asking Martinez whether that kind of one-time ageist reference in the employment process would be actionable.

“I think we would say that it does have to play a role in the decision-making process,” says Martinez, adding that a “stray comment” such as the one suggested by Roberts wouldn’t be enough.

The chief justice presses him a little further. “So calling somebody a ‘boomer’ and considering them for a position would be actionable?” Roberts says.

“I think if the decisionmakers are sitting around the table and they say, we’ve got Candidate A who’s 35 and we’ve got Candidate B who’s 55 and is a boomer and is probably tired and — and, you know, doesn’t have a lot of computer skills, I think that absolutely would be actionable,” Martinez says.

The argument continues with questions about not hiring an 82-year-old (from Justice Stephen Breyer, 81) and an extended hypothetical from U.S. Solicitor General Noel Francisco, in support of the but-for causation standard for the federal sector, involving cakes without eggs.

The court has two cases set for argument on Tuesday morning and one on Wednesday morning next week, then a short courtroom session on January 27 for orders, bar admissions and possibly opinions. That is followed by the usual four-week recess before the February sitting.

So, the chief justice will soon be able to direct much more of his attention to officiating the game of impeachment dodgeball in the Senate.

The post A “view” from the courtroom: “OK, boomer” appeared first on SCOTUSblog.