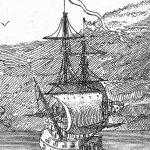 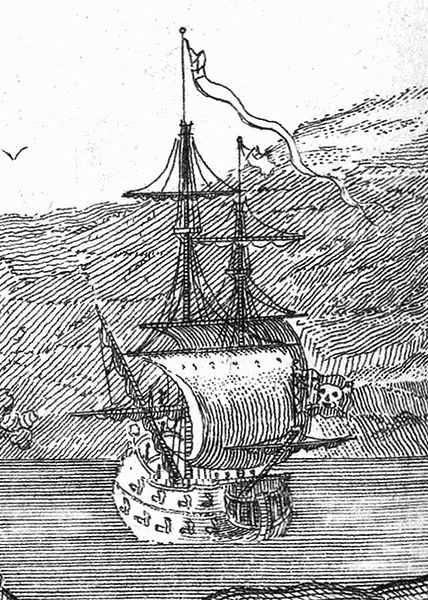 From historically entertaining facts spring important, even if not always riveting, legal issues. Such is the case in Allen v. Cooper, to be argued on November 5. The legal issue is whether Congress can subject states to suit for damages for copyright infringement. Standing in the background is the pirate Blackbeard.

The Queen Anne’s Revenge, Blackbeard’s heavily armed flagship, ran aground off the North Carolina coast in 1718. A private salvage company discovered the shipwreck and in 1998 hired Frederick Allen and his production company, Nautilus Productions, to document the salvage. Allen and Nautilus produced a substantial archive of video and still images of the shipwreck and efforts to recover artifacts. Allen registered copyrights on these works.

In 2013, North Carolina and the state Department of Natural and Cultural Resources displayed some of Nautilus’ work online without permission. Nautilus and the state entered into a settlement, with the state paying $15,000, taking down infringing uses and promising not to use the material in the future. But the state resumed posting Nautilus’ material; when Nautilus demanded the state take the new material down, the state responded by enacting “Blackbeard’s Law,” which designated as a public record all photographs, video recordings and other documentary materials of shipwrecks, and voided previous settlement agreements.

Nautilus and Allen sued in the U.S. District Court for the Eastern District of North Carolina, claiming copyright infringement and seeking monetary damages, among other remedies. The state moved to dismiss on grounds of sovereign immunity. The district court denied the motion as to certain claims, but the U.S. Court of Appeals for the 4th Circuit reversed, concluding that the state was immune from suit.

The basic legal framework for state sovereign immunity is not in dispute. The issue is how that framework applies to the Copyright Remedy Clarification Act of 1990.

The 11th Amendment provides that the “Judicial power of the United States shall not be construed to extend to any suit in law or equity, commenced or prosecuted against one of the United States by Citizens of another State.” The Supreme Court has interpreted this to grant states and state agencies broad immunity from private suit by private individuals, for any remedy, in any court, for violations of federal law.

Congress has the power to subject states to private suit by abrogating immunity. To determine whether that has happened requires a two-step analysis.

First, Congress must provide a clear and unequivocal statutory statement of intent to abrogate and to subject states to suit. The parties do not dispute that the CRCA contains such a statement.

Second, Congress must possess the constitutional power to abrogate, meaning it enacted the legislation under an enumerated power that allows it to abrogate sovereign immunity. Congress has two primary sources of legislative power. It has a laundry list of powers in Article I, Section 8, including the power to “promote the progress of science and useful arts, by securing for limited times to authors and inventors the exclusive right to their respective writings and discoveries,” which provides the basis for patent and copyright laws. And it has the power under Section 5 of the 14th Amendment to “enforce, by appropriate legislation, the provisions” of that amendment, including the right not to be deprived of property without due process.

As to Article I, in Seminole Tribe of Florida v. Florida in 1996, the court held that Congress could not abrogate sovereign immunity in a statute enacted under the Indian commerce clause. But the court went further, stating that “Article I cannot be used to circumvent the constitutional limitations placed upon federal jurisdiction,” seemingly precluding Congress from abrogating under any Article I power; both the majority and dissent assumed the case stood for the broader proposition. Three years later, Florida Prepaid Postsecondary Education Expense Board v. College Savings Bank held that Congress did not abrogate sovereign immunity through the Patent Remedies Act, in part because “Seminole Tribe makes clear that Congress may not abrogate state sovereign immunity pursuant to its Article I powers.” But in 2006, in Central Virginia Community College v. Katz, the court held that Congress could subject states to suit under laws enacted under Article I’s bankruptcy clause.

Because the 14th Amendment limits state power and shifts the federalism balance in favor of the federal government, Congress has plenary power to abrogate immunity when acting under Section 5. But to be “appropriate” Section 5 legislation that “enforces,” a statute must prohibit conduct that is prohibited by the 14th Amendment and must create a statutory right that is “congruent and proportional” to the constitutional right Congress seeks to enforce or vindicate. The statute cannot regulate substantially more state conduct than the Constitution itself or prohibit conduct that is not unconstitutional. Congress must compile a legislative record of a pattern or history of state constitutional violations to justify subjecting states to suit. Florida Prepaid held that Congress did not abrogate sovereign immunity under the 14th Amendment through the Patent Remedies Act, because the statutory rights created were not congruent and proportional to the constitutional right not to be deprived of property without due process.

Allen argues that Congress properly abrogated sovereign immunity under both Article I’s copyright clause and Section 5 of the 14th Amendment.

The Article I argument begins from the premise that Katz overruled dicta in Seminole Tribe. Katz acknowledged the assumption by the majority and dissent in Seminole Tribe that the court was rejecting abrogation for all Article I powers. But Seminole Tribe involved only the Indian commerce clause. When “[c]areful study and reflection have convinced” the court that a statement was erroneous, “we are not bound to follow our dicta in a prior case in which the point now at issue was not fully debated.” Katz established a clause-by-clause analysis, with the court considering the text, structure, history and nature of each Article I clause and power.

Allen argues that the copyright clause allows abrogation. The text gives Congress exclusive power over copyrights, so that retention of sovereign immunity for a state that encroaches on copyrights would be “repugnant.” The clause empowers Congress to “secure” to authors the “exclusive” right to their works for the promotion of the arts. Copyrights cannot be “secure” or “exclusive” if Congress cannot reach and regulate all potential infringers, including states, and if states cannot be held liable for their infringement. The purpose and history of the clause show that the Framers intended to ensure uniform nationwide protection for copyrights.

As for Section 5, Allen argues that the CRCA is congruent and proportional to the constitutional protections against being deprived of property without due process and against uncompensated takings of property. The key is distinguishing the CRCA from the Patent Remedies Act and Florida Prepaid.

Although Congress did not mention the 14th Amendment in enacting the CRCA, it expressed its concern with protecting intellectual property rights against unremedied state deprivations. Florida Prepaid recognized that Congress can use Section 5 to hold states liable for infringing on intellectual property rights without due process or proper compensation. The CRCA does just that.

The abrogation argument failed in Florida Prepaid because Congress did not establish a sufficient legislative record of state violations of patent rights. But, Allen argues, in enacting the CRCA, Congress did what Section 5 and Florida Prepaid require. It compiled a robust legislative record, showing a pattern of copyright infringement by states and the absence of any satisfactory remedy other than damages actions against states. Congress commissioned the register of copyrights to write a lengthy report, supported by multiple hearings, cataloguing a growing pattern of state copyright infringement. And instances of state infringement have “ballooned” since Florida Prepaid “emboldened” states to infringe upon intellectual property in the absence of a federal deterrent. Finally, copyright law is an area of exclusive federal regulation, preempting any state-law rights or remedies. The CRCA is therefore congruent and proportional to remedy an established record of state violations of intellectual-property rights.

North Carolina responds that Congress can abrogate state sovereign immunity only when a constitutional provision allows abrogation through express words or insurmountable implication. Neither appears in the text or history of the copyright clause.

Katz does not justify abrogation under the copyright clause. Katz rested on the unique features of bankruptcy, designed in part to limit states’ use of debtors’ prisons by allowing for discharge of debts, including debts owed to states. More importantly, Florida Prepaid rejected abrogation under the patent and copyright clause. The state insists that Florida Prepaid’s discussion of the limits on abrogation under Article I generally, and the intellectual property clause specifically, were not unconsidered dicta that the court now can disregard. The question of abrogation under patent law was squarely before the court and was necessary to decide whether the statute at issue validly subjected states to suit. That considered reasoning controls this case, which involves the same constitutional provision. The only alternative is for the court to overrule Florida Prepaid, but North Carolina argues that Allen has not made the high showing necessary to overcome stare decisis.

As for Section 5 of the 14th Amendment, the state argues that Congress legislated in the CRCA against copyright-infringing conduct by the states, but not against unconstitutional conduct by the states. Not all copyright infringement violates the Constitution; the infringement must be intentional and the copyright holder must have no other adequate remedy at law, including state law. But the CRCA sweeps more broadly; the statute seeks to stop all state violations of federal copyright statutes, many of them the result of mere negligence and thus not violative of the Constitution. Nor did Congress consider the availability of state or other remedies for copyright holders before establishing broad liability and damages. And Congress made no finding that state violations, even if unconstitutional, were widespread — it created no record of the “unremitting” state violations of rights that would justify immunity.

Even if Congress had found constitutional violations, the chosen statutory remedy is not congruent and proportional to that unconstitutional conduct. Congress failed to “carefully tailor its remedies to target actual constitutional violations by States.” Without identifying specific constitutional problems with state infringement of copyrights, the CRCA imposes a blanket authorization of suits against states. And it subjects states to the “full panoply” of statutory remedies beyond compensatory damages for monetary losses: disgorgement of profits, statutory damages of up to $150,000 per violation, destruction of infringing works, attorney’s fees and costs. Such extensive remedies are not congruent and proportional to any constitutional misconduct by the states that Congress identified in enacting the CRCA.