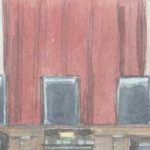 In response to a question about the importance of experienced attorneys in the Supreme Court, Justice Clarence Thomas said:

If it’s my money on the line, I’d be as risk averse as anybody else. I mean you go with the .400 hitter. That doesn’t mean you’re gonna win but … go with someone who will increase your odds.

Supporting Thomas’ response is long-standing theory on human capital. The idea is that through work experience, individuals acquire on-the-job-training, sometimes highly specialized training, which leads them to be more productive and more successful, and, in turn, earn higher salaries. For this reason, litigants who retain experienced Supreme Court lawyers should be at an advantage relative to those who hire first-timers. As Justice Robert Jackson, a seasoned Supreme Court litigator, put it, “Experience before the Supreme Court is valuable, as is experience in any art. One who is at ease in its presence, familiar with its practice … holds some advantage over the stranger to such matters.”

Speculating about the importance of experience — however informed the speculator — is one thing; providing evidence is quite another. It’s really difficult to compare the two sides in any case because of imbalances in quality and resources. Another complication is that first-timers and “repeat players” differ in important ways. Data show that lawyers with experience more often represented the petitioner, worked in Washington, attended a top law school, litigated civil cases. And on and on.

To solve these problems, we conducted a study focused on Supreme Court cases (argued between the 1980 and 2017 terms) in which the Office of the Solicitor General represented the petitioner or respondent. Because of the high quality of the government’s lawyers, a focus on OSG cases allows for comparisons between novice and experienced attorneys without requiring a lot of assumptions about which side has the “net advantage.” What this means is that the question in our study is not how novice and more experienced attorneys fare when they face each other; it is rather how both types of attorneys fare against a comparable opponent: the OSG.

Next, to avoid comparing apples and oranges, we matched novice and experienced attorneys who were alike on all the relevant factors we could observe (e.g., whether they represented the petitioner, worked in Washington, etc.)—except, of course, whether they had argued in the Supreme Court before or not.

A statistical analysis using the matched dataset shows that Thomas and Jackson got it exactly right. An experienced attorney, relative to a first-timer, increases the likelihood of winning a case by 14 percentage points and of capturing a justice’s vote by 11 percentage points. Considering the apples-to-apples comparison, these are substantial differences. (The study is here; Adam Liptak’s comprehensible description is here.)

Others may want to develop the results’ implications. For us the next step is to understand exactly why on-the-job training seems to matter so much. If you have ideas, please email Michael.