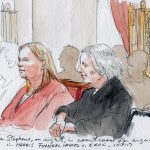 This week on SCOTUStalk, Amy Howe sits down with Kevin Russell to discuss the oral arguments in the LGBT employment discrimination cases heard by the court last week. The pair talk about Pam Karlan’s opening argument in Bostock v. Clayton County, the two-minute rule, Justice Kagan’s interpretation of “because of sex” and Justice Gorsuch’s concern about the “massive social upheaval that would be entailed” by deciding that sex discrimination under Title VII covers transgender people. Kevin Russell is a partner at Goldstein & Russell and has argued 12 cases before the Supreme Court.