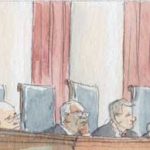 Counsel faced an active bench yesterday when they presented arguments in Romag Fasteners, Inc. v Fossil, Inc. The case arises under the federal Lanham Act, which establishes various remedies for the infringement of trademarks. As explained in more detail in my preview, the question in the case is whether the Lanham Act remedy that obligates infringers to disgorge their profits is subject to a blanket “willfulness” requirement — in other words, a requirement that the plaintiff prove that the defendant “willfully” violated the trademark in order to win an award of the infringer’s profits from using the mark. If the argument is a sound guide, the justices are likely to reject any such requirement.

To understand why “willfulness” might matter, consider the dispute at hand, which involves handbags made in China for the respondent, Fossil. The bags in question were manufactured with counterfeit magnetic snaps: snaps that appeared to be, but were not, manufactured under patent and trademark licenses from the petitioner, Romag Fasteners. Romag successfully sued Fossil for infringing the patent and trademark that protect its snaps. Crucially, the jury found that Fossil acted with callous disregard of Romag’s rights, but that Fossil’s awareness of the counterfeiting was not enough to establish that Fossil acted willfully. Because of Fossil’s lack of willfulness, the lower courts refused to allow Romag to recover Fossil’s profits.

An early comment by Justice Elena Kagan crystallized the problem that Neal Katyal faced in his efforts to defend Fossil’s position that willfulness is an absolute requirement for a profits award. Kagan asked Lisa Blatt, representing Romag, whether it was “open to” the justices to “pick a position someplace between” the parties, holding that “willfulness might not be an absolute necessity but it certainly should be entitled to very significant weight.” Romag might accept that approach with enthusiasm, but it would represent a defeat for Fossil.

The dominant theme during Katyal’s time at the podium was the inherent ambiguity of “willfulness” perceived by several of the justices. Justice Sonia Sotomayor, for example, noted that her “basic problem” is that “the term ‘willfulness’ over the centuries has been differently defined by different people,” primarily because “[s]ome people have includes recklessness [and] others haven’t.” Before Katyal was finished, Justices Ruth Bader Ginsburg and Brett Kavanaugh all referred favorably to that basic point from Sotomayor.

Ginsburg also spent some time pressing a separate concern – the difficulty of reading the text to compel Katyal’s view that willfulness is required in all cases. Ginsburg noted Katyal’s contention that “principles of equity [the language that actually appears in the statute] means willfulness,” but she noted that “in many cases … the statute uses the word willfulness.” She would agree that, “if it said willfulness, that would be plain text, but [not when it says] principles of equity,” as it does here. As Justice Neil Gorsuch put the same point, “‘principles of equity’ [seems to] be an unusual way of saying ‘willfulness.’”

Kavanaugh came at the case from a somewhat different angle, asking repeatedly, “What would be the policy objective achieved by excluding reckless infringement”?  He suggested that it well might not be “worth the candle to exclude all reckless cases … when willfulness will usually be a key factor in the calculus regardless of who wins here.”

As always, we should hesitate before concluding that the justices have settled on an outcome based on a few stray comments at oral argument. That is particularly true in a case like this one, in which so much of the briefing involves heated debates about 19th-century precedents. Having said that, I do think that the argument suggests a strong inclination to decide this one in favor of Romag – rejecting any absolute requirement that trademark owners prove willfulness in order to recover profits from infringers.

Editor’s note: Analysis based on transcript of oral argument.