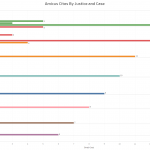 In the introduction to his eye-opening work on the Supreme Court certiorari process, “Deciding to Decide,” H.W. Perry summarizes the court’s lack of institutional transparency: “Although some rules are published, most of the internal procedures are by consensus, are unpublished, and are frequently unknown … We on the outside find out about them only when a justice happens to mention them in a speech or article.” This lack of transparency was what made the release of Justice Harry Blackmun’s papers so powerful. Granted, few justices likely grade oral arguments in the same manner as Blackmun did, but both practices unique to individual justices and those common among them are interesting to learn about for their own sake. These practices also tell us more about the decision-making process than we knew before. Nonetheless, much is still unknown about how the justices, with the help of their clerks, reach their decisions.

The focus of this post is uncovering the sources that the justices rely on in their decisions. One way to do this could be through interviews, if the justices and clerks were willing to divulge this information. In the absence of such direct sources, indirect methods help to shed light on the court’s internal processes. In one paper, for instance, I found that the court shares more language with parties’ merits briefs than it does with amicus briefs or lower court opinions, after controlling for shared language among all three sources. This hints at the possibility that the justices use parties’ briefs as roadmaps in ways that they don’t with other sources.

This post looks to the justices’ overt citations to briefs in their opinions as a direct way to ascertain a brief’s importance to a case. Although the justices’ opinions often cite to parties’ merits briefs, citations to amicus briefs are rarer. There are several reasons for this. Many cases have large numbers of amicus briefs that crowd out the impact of individual briefs. Amicus briefs also tend to focus on discrete policy issues in cases, and so may hit on issues that are outside of the justices’ main areas of interest.

A unique approach employed in this post is to use several levels of controls to try to suss out a weak causal process in the justices’ citations. To do this, this post uses the 2018 term cases with signed opinion(s) and more than five amicus briefs filed on the merits. It then looks at citations to sources other than Supreme Court opinions since 1900 (citations to pre-1900 cases are included, as are citations to cases from lower courts). The point of focusing on these sources is to isolate potentially unique resources the justices may rely on in crafting opinions. The data also examines citations to journals, state statutes and other less frequently utilized resources. These citations were uncovered using opinions that contained hyperlinked sources. These sources were then used as search terms across all the briefs within a case. If a source was cited in only one brief, or in one party’s brief and one amicus brief, it was retained as a source of interest. The weak causal argument is that, due to the unique nature of the cite and the minimal number of sources alluding to it, the cite or cites from the brief were likely what led the justice(s) and/or clerk(s) to the source. This in turn supports the inference that this brief could have been an important resource for the justice(s) and/or clerk(s) when drafting the opinion.

Direct citations to briefs are a clear resource for understanding opinion construction. With these, the justices give us glimpses of the resources that helped them render their decisions. Citations are not always positive, though. Sometimes justices cite briefs as foils or straw men to break down a counterargument. But even in such instances, the justices still give us a sense of which arguments they deemed important enough to respond to, and who made those arguments. This in turn gives the brief added justification, if only for the purpose of telling us that it contained an argument that a justice either agreed or disagreed with. Such processes are also apparent, though less so, in the weak causal cases in which the justices do not mention the initial citing source.

The figure below has all of the justices’ cites to amicus briefs for the 2018 term broken down by case. Multiple cites to the same brief by different justices are not double-counted. It also has the total number of citations to amicus briefs by each justice across the term within each justice’s frame and below the names of the cases.

Here we see that the more liberal justices more often cited amicus briefs during the 2018 term. Justices Elena Kagan and Ruth Bader Ginsburg both cited 15 amicus briefs, while Justice Stephen Breyer came next with 11. The bulk of Kagan’s cites were from Rucho v. Common Cause, while most of Ginsburg’s were from American Legion v. American Humanist Association. Breyer’s opinion with the most cites was in Department of Commerce v. New York.

Justices Neil Gorsuch, Samuel Alito, Sonia Sotomayor and Clarence Thomas and Chief Justice John Roberts all had between six and 10 cites to amicus briefs across the term. Justice Brett Kavanaugh, in his first term on the court, had by far the fewest, with only one in American Legion and one in Apple v. Pepper.

Sources behind the sources

The next set of figures examine the briefs that cited more esoteric sources included in the justices’ opinions. The first figure pares down the set of cases from OT 2018 with more than five merits amicus briefs and a signed opinion. 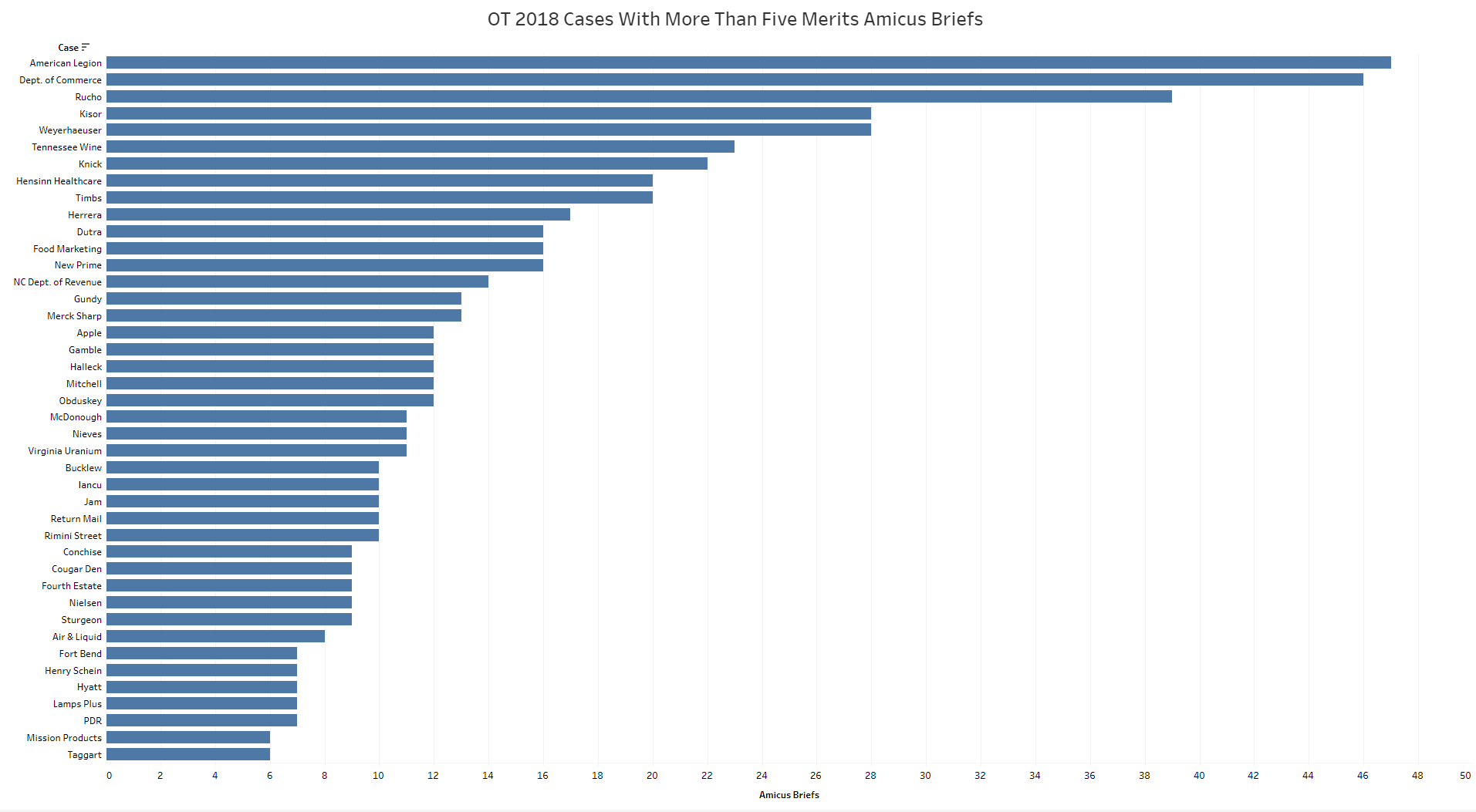 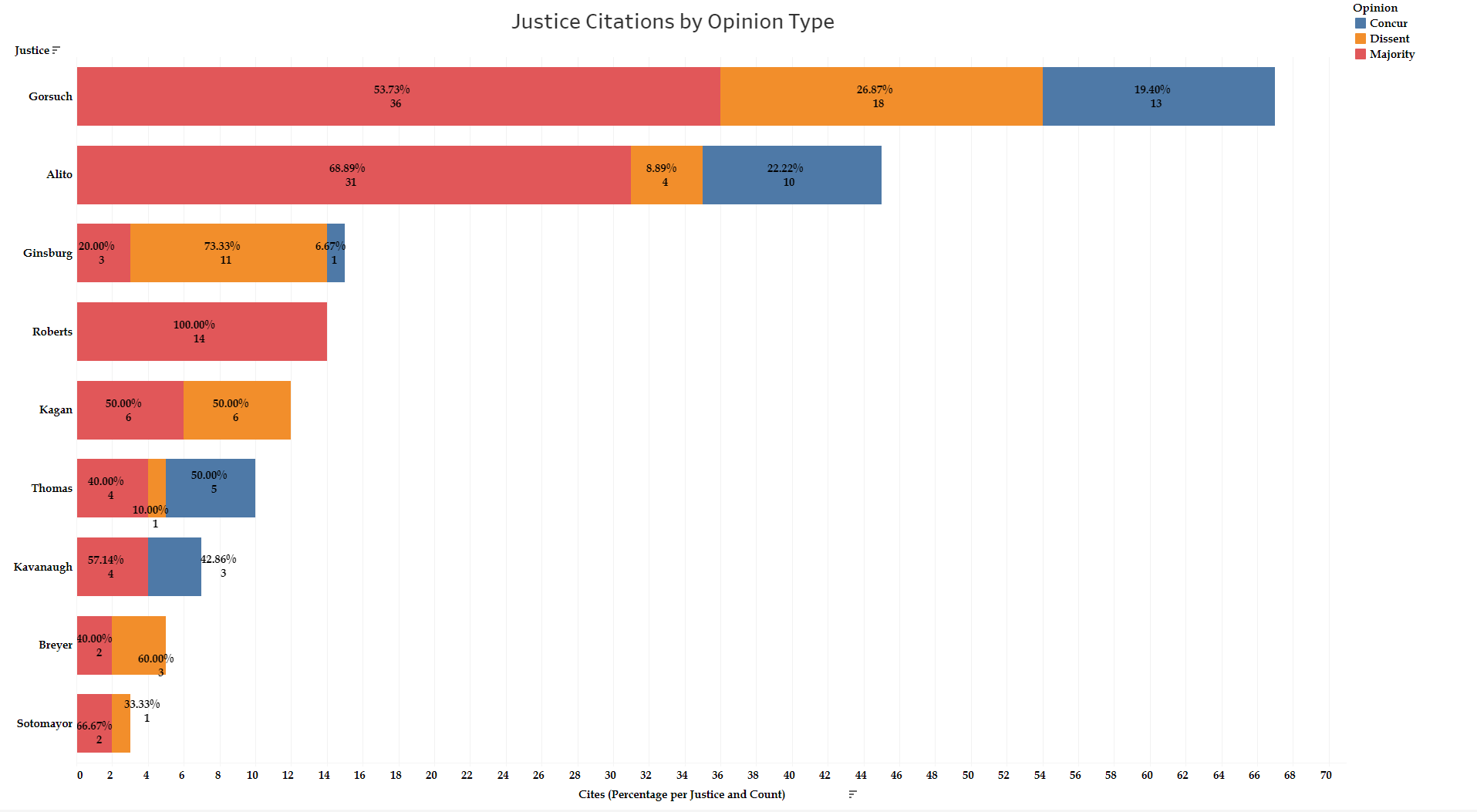 Unlike with direct cites to the briefs, Gorsuch and Alito are far ahead of the rest of the pack in their unique cites. Gorsuch’s 67 such cites are more than twice as many as those from any other justice, aside from Alito. Gorsuch also has a decent mix of these cites across opinion type. Alito’s balance is weighted toward majority opinions, while Ginsburg’s is weighted toward dissents. The only justice with unique cites in only one opinion type is Roberts, who only included such unique cites in his majority opinions. Roberts, however, is an infrequent dissent author and an even less frequent concurrence author. Kavanaugh had more unique cites than both Sotomayor and Breyer.

The next figure looks at this data by case and justice. The legend on the right conveys the bar color for each individual justice. The number within each bar is the number of unique cites by that justice in their opinion for that case. 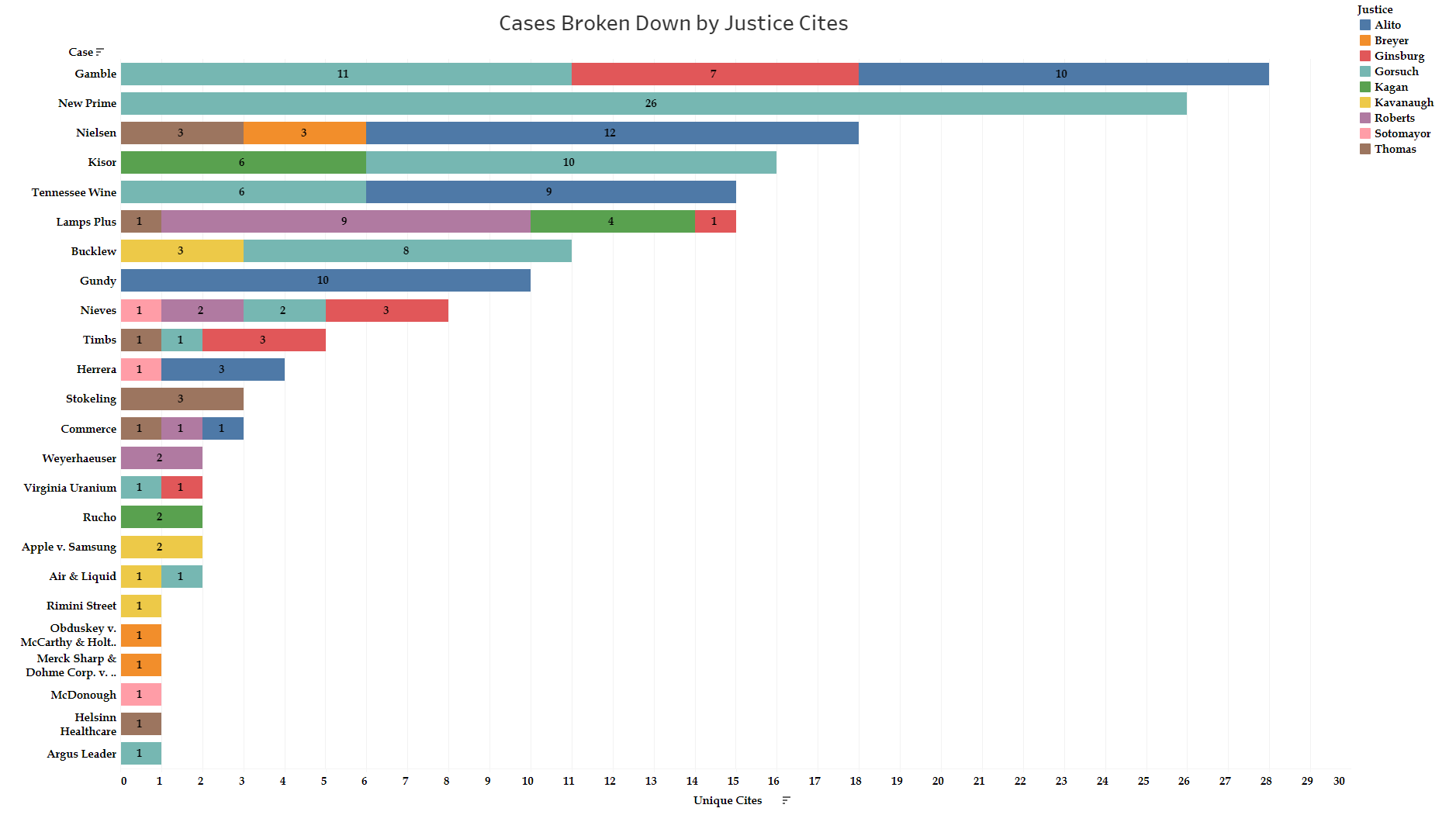 Gamble v. United States and New Prime v. Oliveira were the cases with the most unique cites. The cites in Gamble were from a mix of Gorsuch’s, Ginsburg’s and Alito’s opinions. The ones in New Prime were solely from Gorsuch. Other cases with a high number of unique cites include Nielsen v. Preap, Kisor v. Wilkie and Tennessee Wine and Spirits Retailers Association v. Thomas. In all cases aside from New Prime with a large number of unique cites, the cites appear in more than one justice’s opinion. The next case with unique cites from only one justice’s opinion is Gundy v. United States, in which all 10 unique cites come from Alito’s concurring opinion.

Looking at the groups whose amicus briefs contained these unique cites, we see a few prominent players. 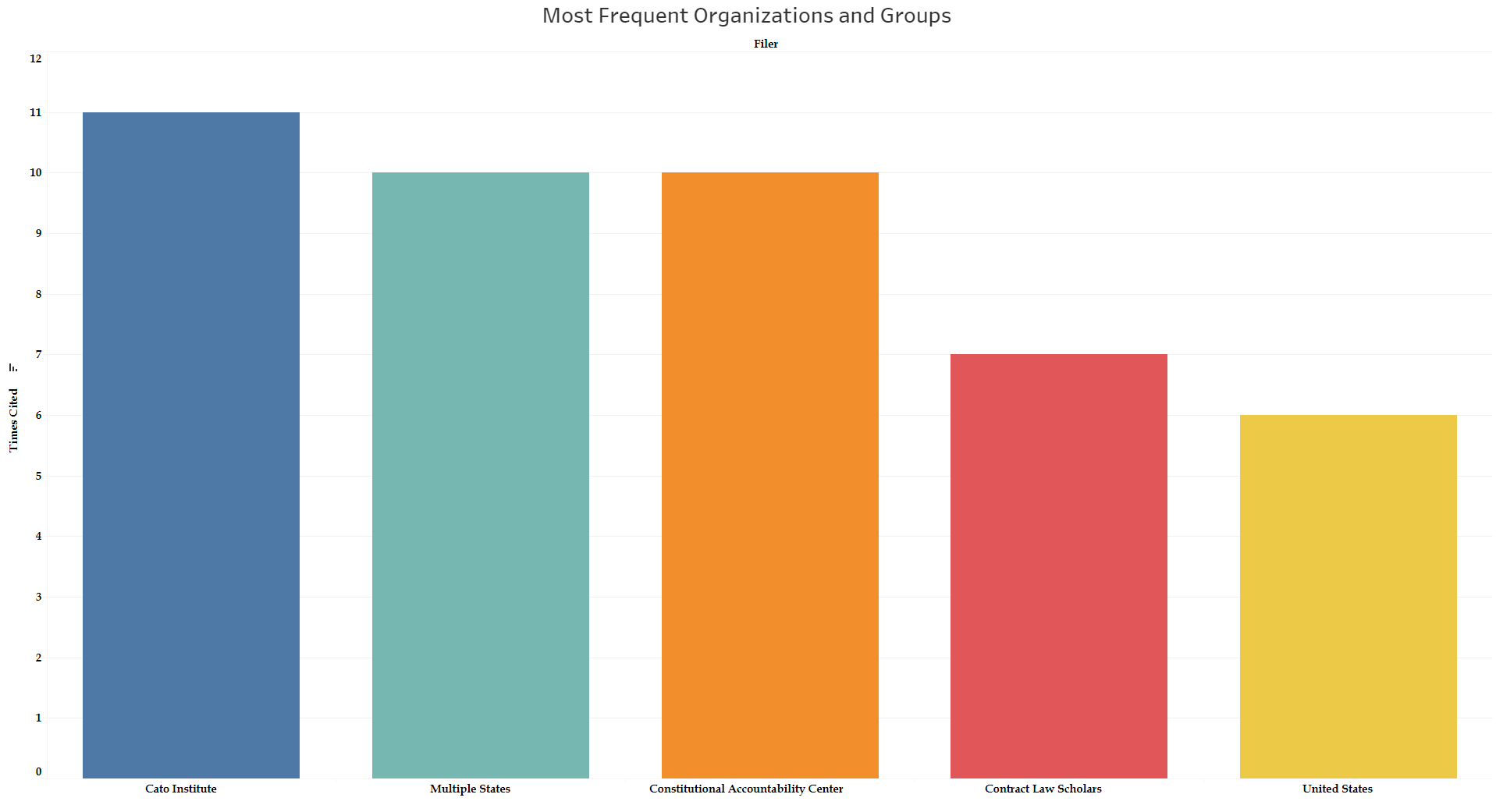 In addition to the organizations whose unique sources were cited most frequently, other prominent brief types made contributions to the justices’ cites. Two senators, Sheldon Whitehouse, Democrat from Rhode Island, and Orrin Hatch, former Republican from Utah, both had briefs with unique cites picked up by the justices. Hatch’s unique cite was found in Ginsburg’s dissenting opinion in Gamble, while Whitehouse’s cite was found in Gorsuch’s majority opinion in New Prime. The other brief from congressional representatives that produced a unique cite in an opinion was from Representatives Andy Biggs, et al., in Nielsen. Thomas’ concurrence, Breyer’s dissent and Alito’s majority opinion all contained a unique cite from the representatives’ brief.

Although these methods will not identify the justices’ resources in constructing opinions with absolute certainty, they do give us some additional insight into the justices’ processes of developing arguments in their opinions. They also tell us with greater certainty which briefs played a role in the justices’ decision-making. This in turn might highlight the importance of specific groups’ briefs for specific justices and in specific cases. Additional work in this area could further illuminate specific aspects of the court’s decision-making processes.

Empirical SCOTUS: Things we haven’t seen before at the outset of a Roberts Court term