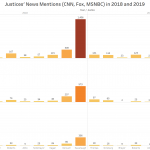 Supreme Court justices live dual lives. On one hand they generally manage to stay out of the limelight while actually doing their jobs. Even with pressure to the contrary, the justices have managed to keep cameras out of the court and to limit the release of audio recordings of oral arguments to the Fridays after the arguments are heard. The justices’ other interactions with one another are held behind closed doors and details are only occasionally made public years after events transpire, in the event a justice chooses to release his or her personal papers after leaving the bench. (Justice Harry Blackmun was the last justice to do so.)

That said, the justices do quite a bit of posturing to stay relevant to the public. Some of this has to do with earning additional income through book publications and tours. (Justice Neil Gorsuch, for example, recently released “A Republic, If You Can Keep It” with the help of his former clerks David Feder and Jane Nitze.) The justices also go on speaking tours unrelated to books, teach at institutions of higher education both domestically and abroad during breaks from Supreme Court work and occasionally are covered in the mainstream media for occurrences wholly unrelated to their judicial decisions. An entire website, SCOTUS Map, is dedicated to tracking the justices’ extra-judicial pursuits.

Although the justices have been the subject of media attention for years, over the last decade several articles, including one by former Judge Richard Posner and another by law professor Rick Hasen, have examined the cult of celebrity surrounding Supreme Court justices. Part of the reason for these recent examinations has to do with the justices coming out of the shadows of their work more frequently (for example) and some has to do with their attempts to garner the public’s attention with publications and media appearances. This post primarily looks at news coverage of the justices since Chief Justice John Roberts took the bench in 2005. 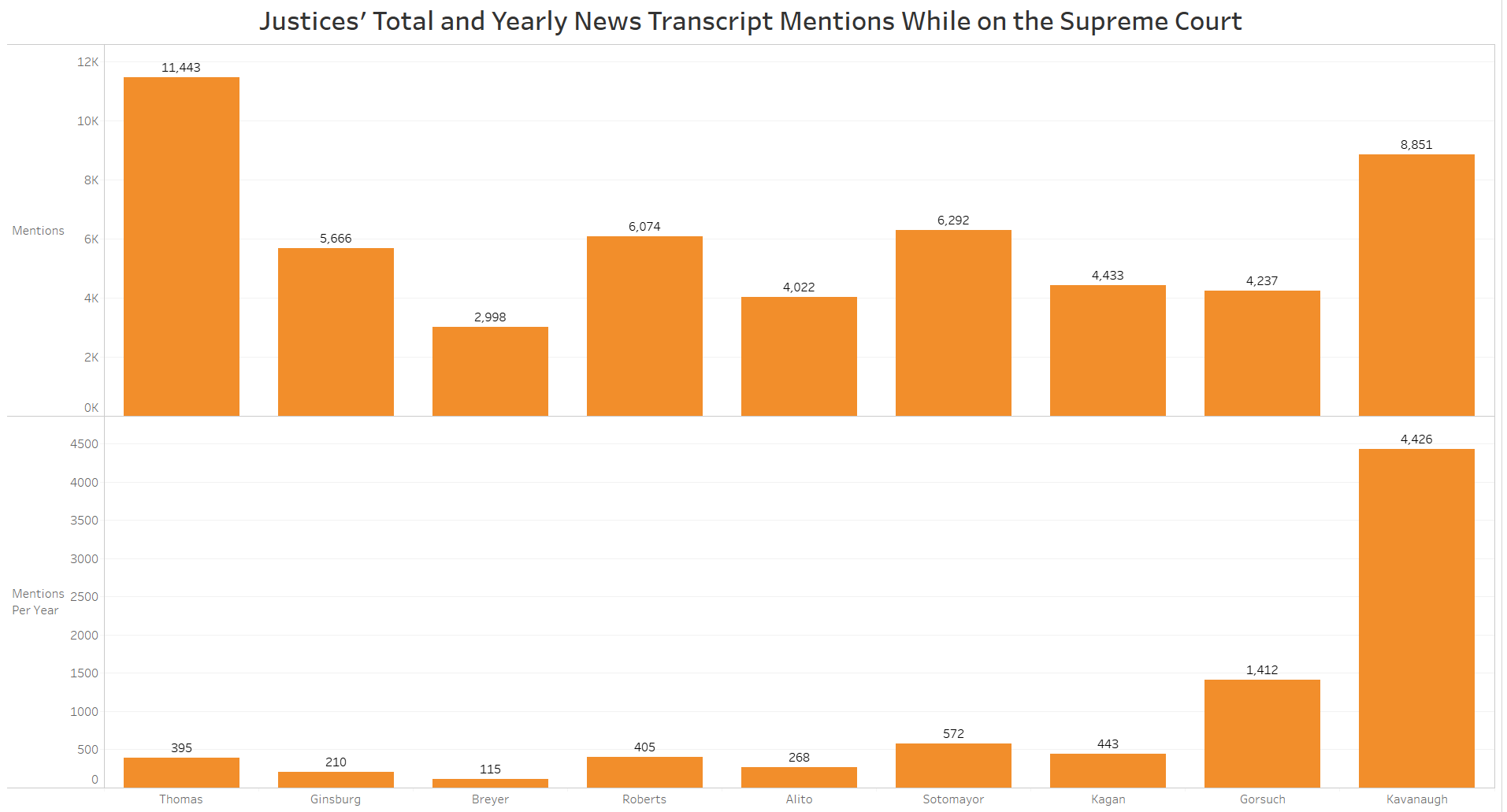 For a variety of reasons, both political and otherwise, recent coverage has been skewed towards President Donald Trump’s appointees: Gorsuch and Justice Brett Kavanaugh. The figures in this post are derived from LexisNexis’ data on television news coverage via news transcripts. The first set of graphs look at total news coverage of the justices across their careers (on top) and by year (on the bottom). Each mention refers to a program in which the justice was mentioned and not the number of mentions within a given program.

Although Justice Clarence Thomas, who has been on the court the longest, also has the most aggregate coverage, Kavanaugh, the newest justice, has the second-most total coverage. Much of the coverage for both was due to their high-profile (and widely televised) confirmation hearings in which they were accused of sexual harassment and sexual assault, respectively.

Gorsuch’s hearing garnered much public attention, as he became the successor to Justice Antonin Scalia after President Barack Obama’s nominee, Judge Merrick Garland, was never afforded a Senate confirmation hearing. After Kavanaugh and Gorsuch, the justices with the most coverage by year basis have been Justices Sonia Sotomayor and Elena Kagan, along with Roberts. Justice Stephen Breyer has had the least news coverage overall as well as by year.

The following graph shows these numbers in greater detail by providing the number of times the justices were mentioned in the news between 2005 and the present. It also includes the number of mentions for Thomas, Breyer and Justice Ruth Bader Ginsburg in each of their first two years on the court. 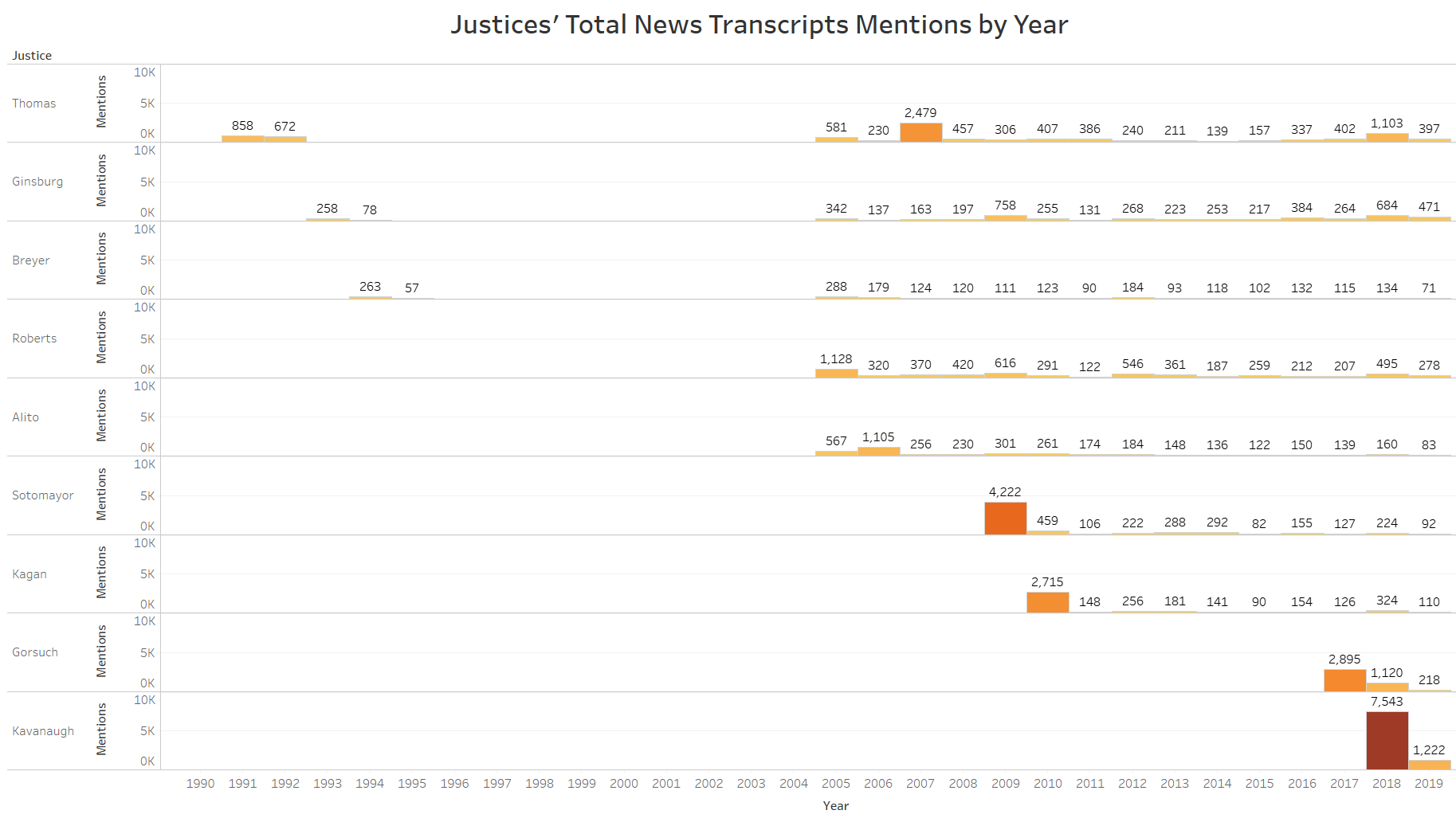 The bulk of the coverage of the justices tends to occur during their first term on the bench. This is due to the focus on their confirmation hearings and speculation about how their presence will change the court’s dynamic. In several instances, though, the news media has focused on the justices for other reasons as well.

Thomas experienced the height of his news coverage in 2007. Much of this attention was focused on the release of his autobiography, “My Grandfather’s Son,” including this NBC News piece from September 29, 2007:

“PETE WILLIAMS reporting: Sixteen years after explosive Senate hearings nearly derailed his nomination, Clarence Thomas views the ordeal just as he did then.

Justice CLARENCE THOMAS: It is a high-tech lynching for uppity blacks who in any way deign to think for themselves.

WILLIAMS: Justice Thomas speaks out in his new autobiography, “My Grandfather’s Son,” a reference to the man who raised him after he was abandoned by his father. Of the Democratic senators who aggressively questioned him, Thomas writes that he was pursued, quote, “not by bigots in white robes, but by left-wing zealots draped in flowing sanctimony.”

Thomas found himself in the spotlight again in 2018 during Kavanaugh’s confirmation process, as many news outlets looked back at Thomas’ hearings and the Anita Hill allegations, including this instance from NPR on February 20, 2018:

“STEVE INSKEEP: A writer who’s closely followed the career of Supreme Court Justice Clarence Thomas favors a second look at the allegations against him. Back in 1991, his former colleague Anita Hill accused Clarence Thomas of sexual harassment, a story broken by our own Nina Totenberg. In dramatic confirmation hearings, Thomas denied all the charges and was confirmed. Journalist Jill Abramson covered that story then and has now revisited the allegations in New York magazine. She lays out the case for Thomas’ impeachment. Abramson yesterday told us that Anita Hill was not the only woman who wanted to speak against Clarence Thomas.

Ginsburg garnered an unusual amount of attention in the news in 2009 due to her diagnosis of pancreatic cancer. An example of this coverage came from CBS News on February 6, 2009:

WYATT ANDREWS reporting: The announcement describes Justice Ginsburg’s illness as apparently early-stage pancreatic cancer, and says a routine physical had revealed a small tumor of approximately one centimeter, which surgeons removed. The news sent a shock wave through Washington, beginning with the president.

“NEAL CONAN: Well, it turned out the chief justice mixed up a few words, more than a few words, – to the pre – anyway, the Constitution specifies the 35 words that make up the presidential oath. If he does not speak them exactly, is he really president? Do Barack Obama and John Roberts need a do-over? Well, we’ve asked Constitution law expert Jonathan Turley to join us to sort this out, and nice to have you back on the program, Jonathan.

CONAN: He’s with us here in Studio 3A. It seemed that Obama seemingly knew that the chief justice was off and paused a moment to give him an opportunity to restate it.

Prof. TURLEY: It seemed clear to me that he caught the error. You know, the interesting thing about the word “faithfully” is that it’s an anchor word for oaths. You know, people tend to break oaths up, and “faithfully” is one of those words that breaks the oath up. And it was clear that Obama realized that faithfully had come too soon, and he stopped. But unfortunately, it wasn’t rectified. He gave the oath in a fashion that is different from that in the Constitution, and the problem with the Constitution is that it has these words in quotes.

These instances make clear that the fodder for news coverage of the justices comes from a wide range of issues, some but not all of their own choosing.

Coverage of the justices differs across sources as well. The following graph looks at coverage of each of the justices by three main television news networks – CNN, Fox News and MSNBC – over the past two years. 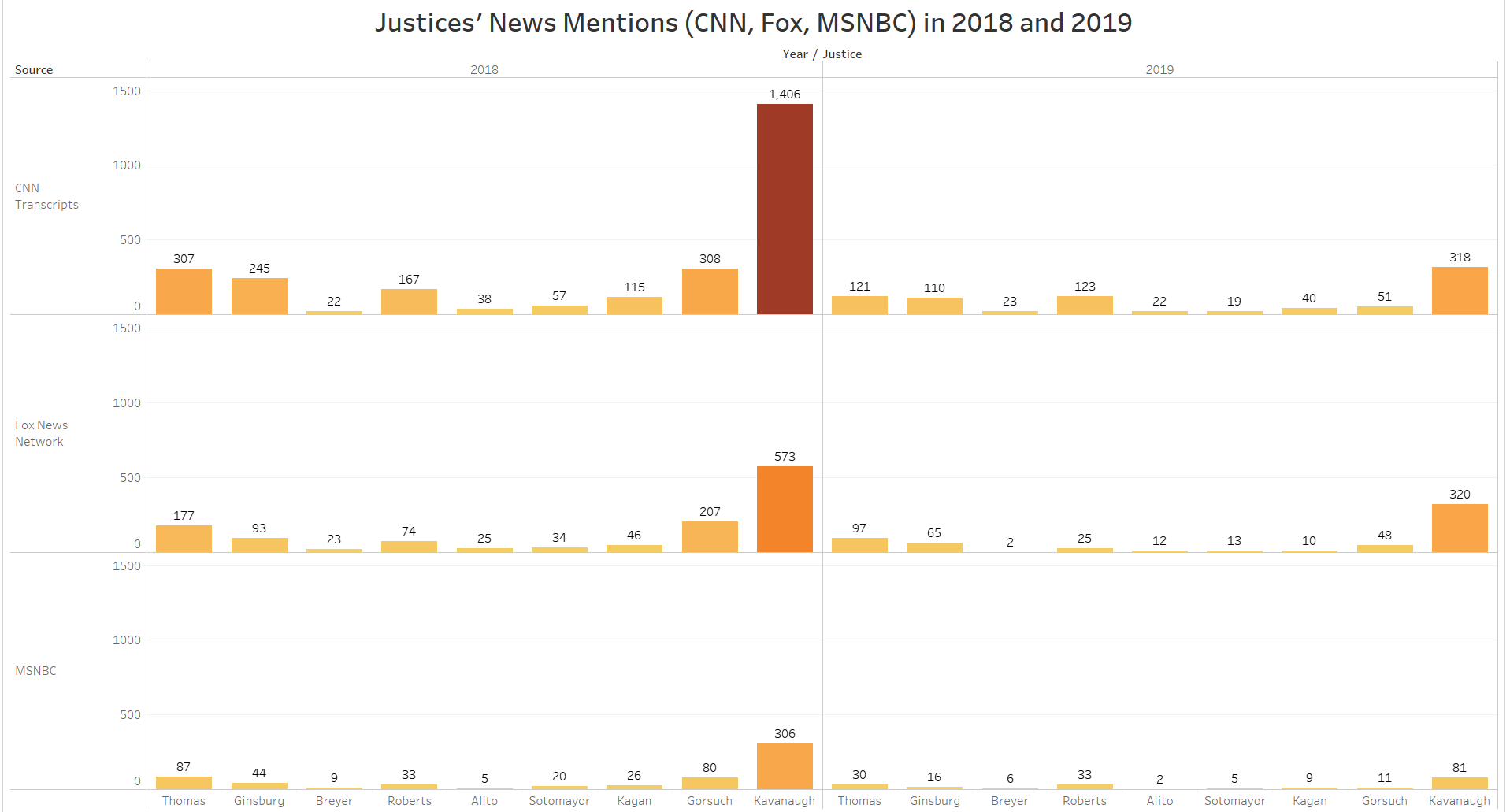 Because we are only about a month away from the end of the 2019 calendar year, the 2019 numbers should not change a great deal between now and the year’s end. This graph provides several interesting insights.

CNN provides more coverage of the justices than the other two networks, and Fox News provides more coverage than MSNBC. There were only a few exceptions to this general rule. The only anomaly to this trend in 2018 was that Fox News mentioned Breyer more often than CNN did (albeit a close 23 compared to 22 times). MSNBC has mentioned Breyer and Roberts more times than Fox News so far in 2019. Interestingly, in contrast to the numbers from 2018, Fox News has mentioned Kavanaugh 320 times in 2019, compared to CNN’s 318 mentions of him. This comes after CNN mentioned Kavanaugh 1,406 times in 2018, compared to Fox News’ 573 mentions. This may have to do with the transition in coverage from Kavanaugh’s confirmation hearing to the Supreme Court’s current and future business.

Kavanaugh dominated the mention count in 2018 due to his confirmation hearing, but he has also been the most bandied-about justice in 2019. This has to do with both residual conversation about his confirmation and discussion of how his presence is reshaping the court. Although Gorsuch was the second-most mentioned justice in 2018, he has been less covered in 2019. Thomas maintained a high rate of mentions relative to the other justices across both years, as did Ginsburg and Roberts. Breyer and Justice Samuel Alito were talked about the least frequently.

The justices are sometimes focal figures in television news. They are not always the intentional instigators of this coverage, however. Although the bulk of the coverage has to do with their confirmation to the Supreme Court, much also has to do with their affairs outside of the court. As long as the justices keep cameras out of the courtroom, their presence in the news will never hit its full potential. But as the numbers show, there is great variation in news coverage of the justices over the years, and sometimes the coverage is quite prolific. If Trump has the opportunity to make another nomination to the court, we should expect to see another surge in coverage. Outside of this, coverage of the individual justices will likely continue to ebb and flow, mixing discussion of their decisions on the court with reports on their actions and interactions outside of their judicial duties.