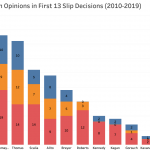 Editor’s note: The datasets in this piece were run before the court’s 5-4 decision in Kansas v. Garcia on March 3. The piece was originally published at Empirical SCOTUS.

Justice Ruth Bader Ginsburg is traditionally one of the most active justices at the beginning of each Supreme Court term. It should come as no surprise therefore that she authored three of the court’s first 13 decisions for the 2019 term. She tends to have the backing of the full court in these early term decisions, and her majority opinions this term were no exception, as all three decisions were unanimous. No justices authored separate opinions in Ritzen Group Inc. v. Jackson Masonry, while Justices Clarence Thomas and Samuel Alito filed concurrences in Monasky v. Taglieri and Justice Brett Kavanaugh filed a concurrence in Shular v. United States. All three decisions were unanimous, and Chief Justice John Roberts assigned all three to Ginsburg, the second most senior justice on the court after Thomas. Although these aspects of the start of the 2019 term might not indicate anything unusual on their face, Ginsburg has been particularly active this term. 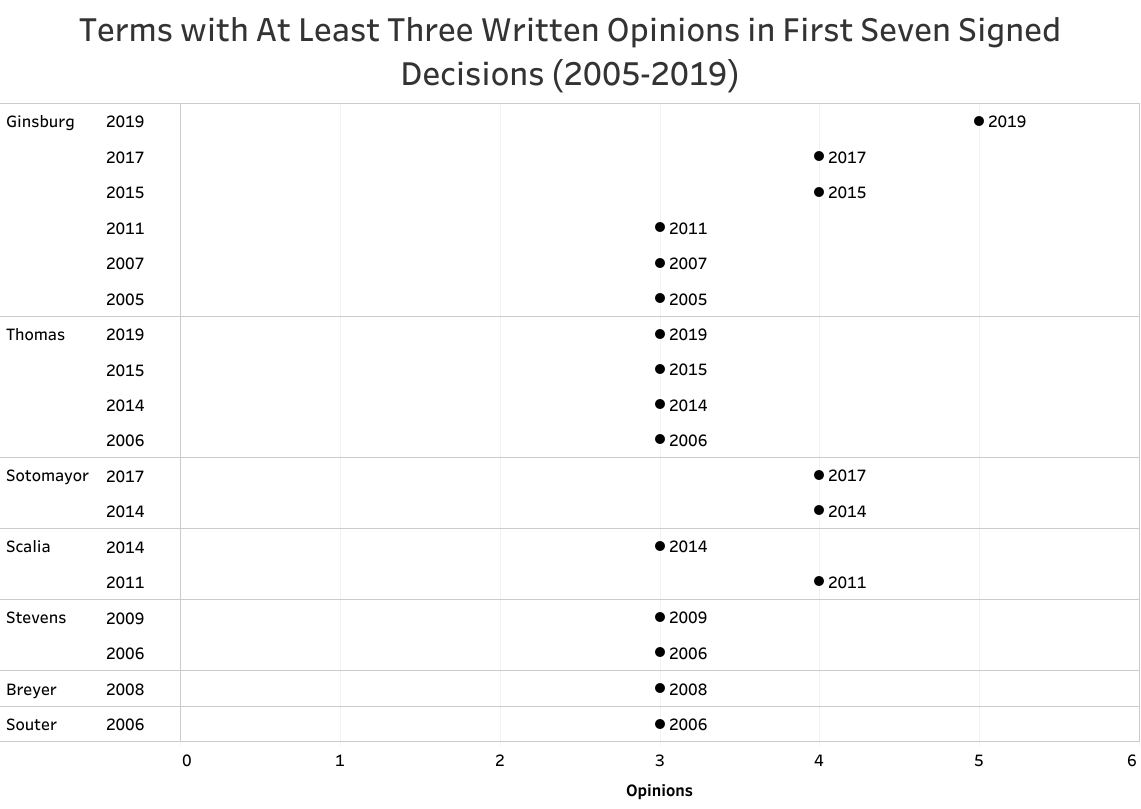 The court has released 13 slip decisions so far this term. Along with the first seven signed decisions, the court released three more signed decisions on February 26 and three unsigned per curiam decisions since November 2019. Not counting her statement in the court’s per curiam decision in Thompson v. Hebdon, Ginsburg authored six opinions within these first 13 decisions. This is one short of her high-water mark for the 2005 through 2019 terms, which came in 2011. 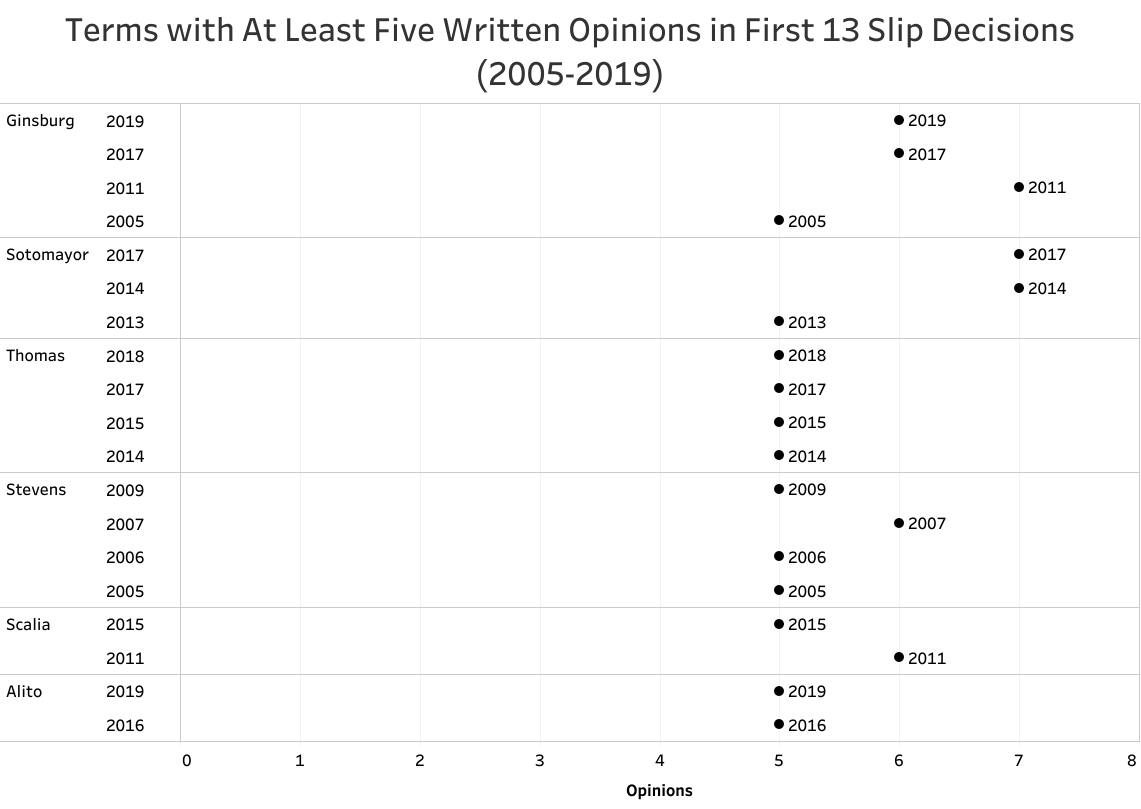 Sotomayor is the only other justice with seven opinions in the first 13 signed decisions in a term since 2005, which she achieved in the 2014 and 2017 terms.

When we aggregate all the opinions from the first 13 signed decisions since the 2005 term by justice, we again see Ginsburg’s high early-term productivity compared to the other justices. 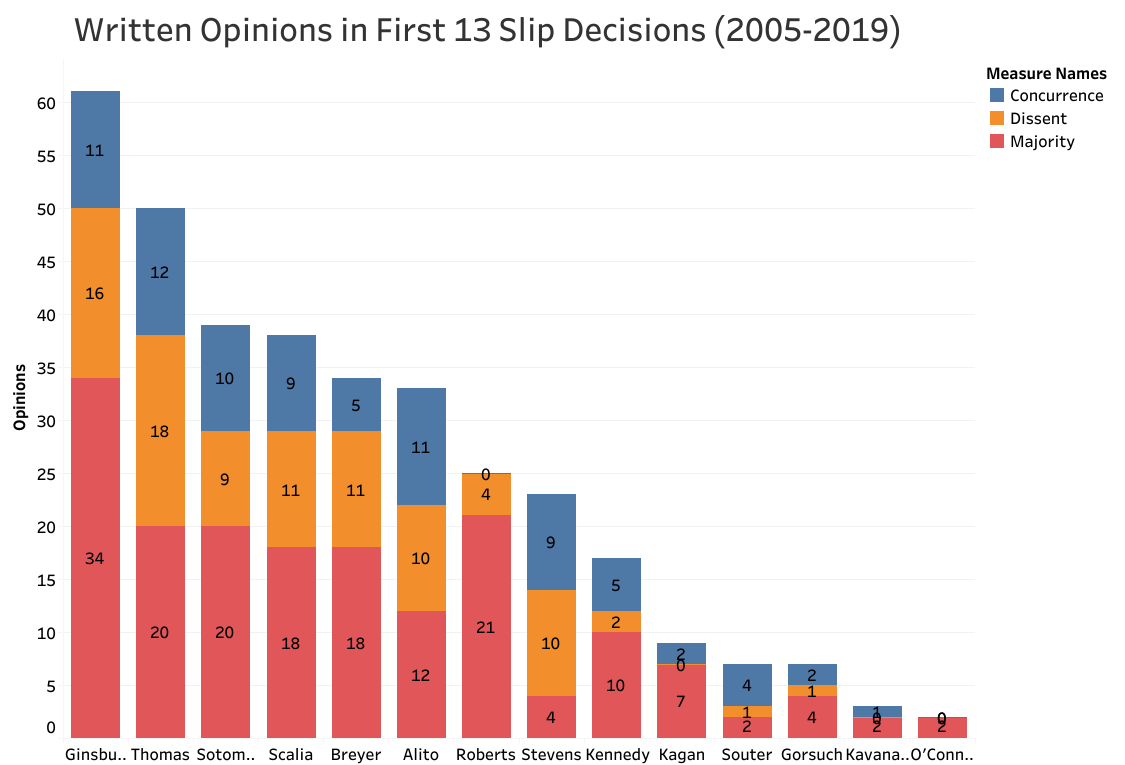 Ginsburg’s 61 total opinions are 11 more than Thomas’ 50, the next highest number among the justices. Her 34 majority opinions are 13 more than Roberts’ 21, which is the next most in that category.

Because Sotomayor joined the court at the beginning of the 2009 term and Justice Elena Kagan joined at the beginning of the 2010 term, the above graph relatively diminishes their output. (It does the same to Justices Neil Gorsuch and Brett Kavanaugh, but it is difficult to extrapolate on their output due to their limited number of terms so far on the court.) To try to account for this, the next graph shows opinion output from the first 13 signed decisions since the 2010 term. 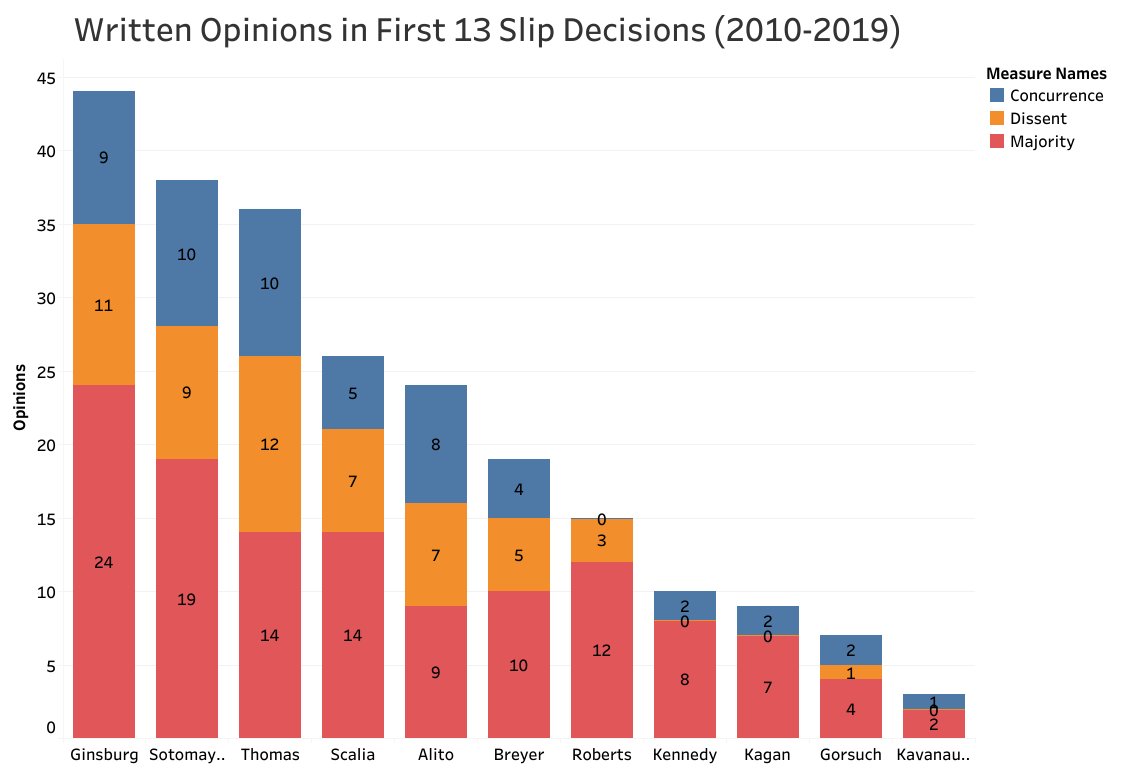 The difference between Ginsburg’s output during this period and that of the other justices is not quite as substantial but is still very apparent. Ginsburg’s 44 total opinions are six more than Sotomayor’s 38 and eight more than Thomas’ 36. On the other end of the spectrum, Kagan tallied a total of nine opinions during this set of decisions for the period of 2010 through 2019.

Not much changes when we focus on the first seven signed decisions of each term since 2005. 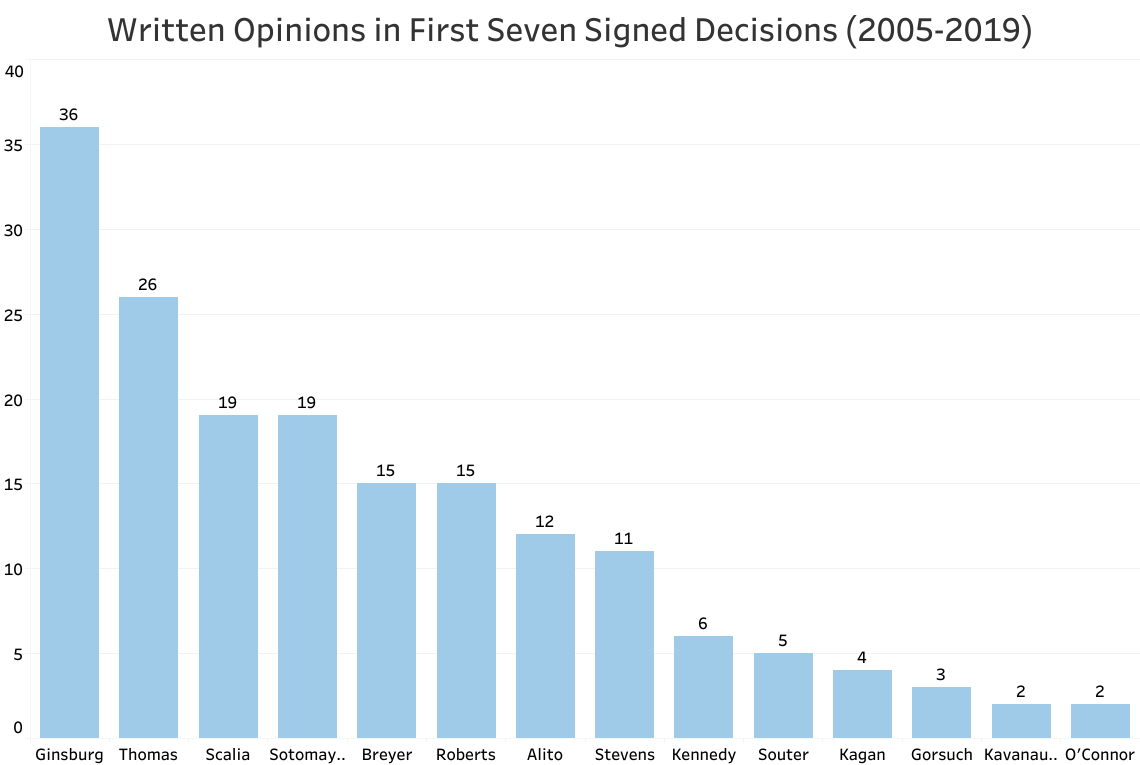 With 36 total opinions, Ginsburg has 10 more than Thomas’ 26 and 17 more than Sotomayor’s and Scalia’s 19 apiece. As with the previous graph, Kagan is at the low end here with a total of four opinions.

Although the above graphs focus on the high level of early term output from the justices, this is not necessarily the norm. Multiple justices have authored only one or zero opinions across the court’s first 13 decisions in a term since 2005, as the next graph illustrates. 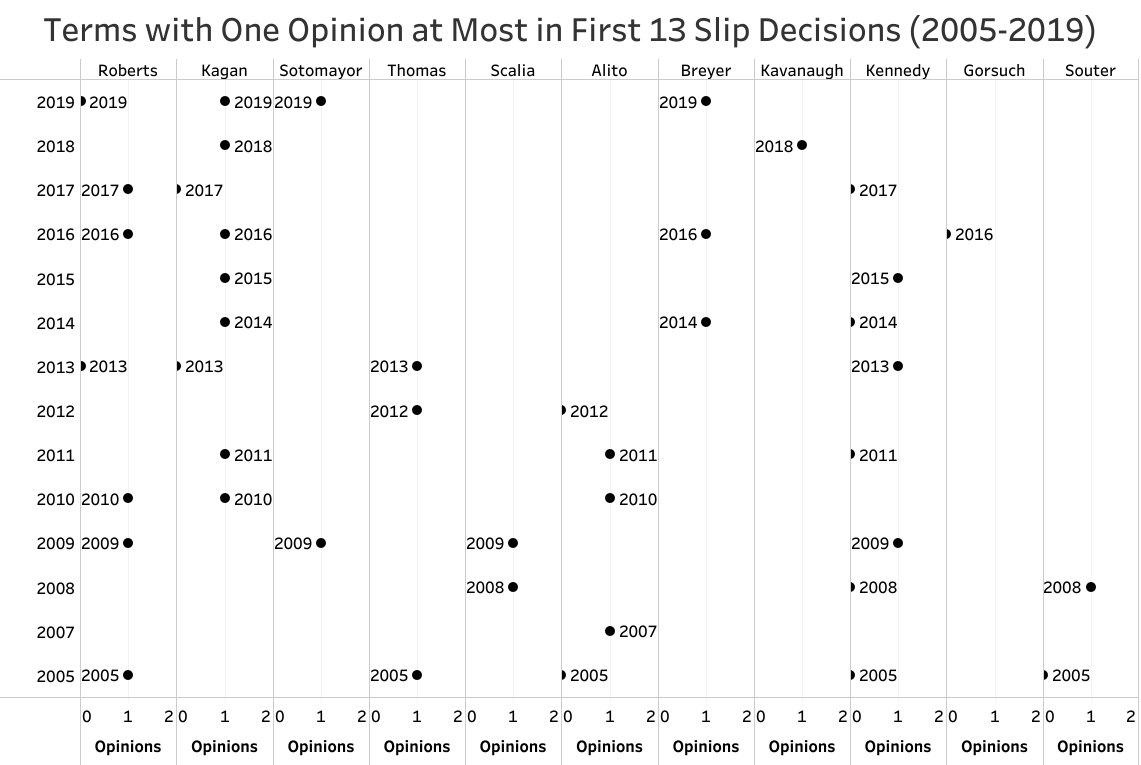 While on the bench, Justice Anthony Kennedy had the most terms between 2005 and 2019 with zero opinions across the court’s first 13 decisions, with four such terms. He is followed by Kagan, Roberts and Justice Samuel Alito, who each have two terms with zero opinions within this framework. When terms with one opinion out of the court’s first 13 decisions are included, the court’s leaders are Kagan with nine terms, Kennedy with eight and Roberts with seven. These three justices have tended to minimize their separate opinion authorship and have often authored powerful and highly polarized decisions toward the end of each term. Many such decisions come down to 5-4 votes.

With Ginsburg authoring the dissents in the court’s two 5-4 decisions so far this term, both of which split the justices across ideological lines, we see the importance she places on asserting her views in these fractures. (Ginsburg assigned the 4-justice dissent in Kansas v. Garcia on Monday to Justice Stephen Breyer.) In recent years, Ginsburg has been vocal both about Donald Trump during the 2016 presidential race, and about the role of politics in Supreme Court decision-making. Such comments led to Trump’s recent assertion that Ginsburg and Sotomayor should recuse themselves from cases in which the president has a role in the litigation. (The president’s request regarding Sotomayor relates to her dissent from a recent decision allowing Trump’s immigration policy to proceed.) Such discord, combined with the enhanced role Ginsburg has played strengthening the court’s left, further augments the all but certain radical changes the court would undergo if Trump were able to fill Ginsburg’s seat on the court with a more conservative justice.

The post Empirical SCOTUS: Things we haven’t seen before at the outset of a Roberts Court term appeared first on SCOTUSblog.