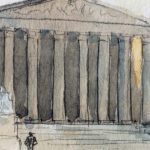 Yesterday President Donald Trump asked the Supreme Court to review a decision requiring Trump’s accounting firm to comply with a congressional subpoena for the president’s financial records. Amy Howe has this blog’s coverage, which first appeared at Howe on the Court. For The New York Times, Adam Liptak reports that this “follows a petition filed last month about a similar subpoena from Manhattan prosecutors”; “[b]oth cases are moving fast, and the court could announce as soon as Dec. 13 whether the justices will hear them.”

In an op-ed for The Sacramento Bee, Elizabeth Slattery writes that dismissing New York State Rifle & Pistol Association Inc. v. City of New York, New York, a challenge to New York City’s now-repealed limits on transporting personal firearms, “would send the message to localities, states and even the federal government that they can thwart judicial review and avoid accountability under the Constitution.” At Second Thoughts, Jake Charles criticizes the “text, history and tradition” test promoted by the gun-rights advocates in the case, suggesting an alternative test under which a “historical or traditional pedigree is a sufficient reason to uphold a regulation, but it is not a necessary one.”