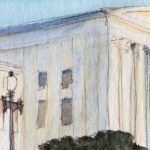 The editorial board of The Wall Street Journal takes issue with “a remarkable and threatening amicus brief” in which five Democratic senators “all but tell the Justices that they’ll retaliate politically if the Court doesn’t do what they say in a Second Amendment case,” New York State Rifle & Pistol Association Inc. v. City of New York, New York. At The New Republic (via How Appealing), Matt Ford explains that although the case “could be a major ruling on how far cities and states can go to restrict handguns in their jurisdictions,” “it stands to reveal much more about how the court’s newly-bolstered conservative majority will handle gun-control measures in the age of mass shootings, and how bold they are willing to be after many years of shying away from handing down rulings on the matter.”