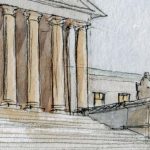 This morning the Supreme Court will kick off October Term 2019 by hearing oral argument in three cases. First up is Kahler v. Kansas, which asks whether the Constitution allows states to abolish the insanity defense. Amy Howe previewed the case for this blog, in a post that first appeared at Howe on the Court. Joseph Grosser and Kayla Anderson have a preview at Cornell Law School’s Legal Information Institute. Subscript Law provides a graphic explainer for the case. Kalvis Golde reports for this blog that this is the first of three cases Kansas will argue during the next few weeks. At The Atlantic, Garrett Epps writes that “Kansas’s statute and others like it are relics of that time of hasty political grandstanding by both parties, the era that brought the nation mandatory minimums and mass incarceration,” and “Kahler’s hope is that the Court is feeling the social hangover that much of the country feels.”

This morning’s second argument is in Peter v. NantKwest, which asks whether a federal law allowing a patent applicant to seek review of a patent denial in district court but requiring the applicant to pay “all the expenses of the proceeding” includes expenses for Patent Office personnel, including attorneys. Ronald Mann had this blog’s preview. Cornell’s preview comes from Eric Cummings and Andrew Kingsbury.

The justices will return to the bench after lunch for a rare afternoon argument, in Ramos v. Louisiana, in which they will consider whether the Sixth Amendment’s guarantee of a unanimous jury applies to the states. This blog’s preview, which first appeared at Howe on the Court, came from Amy Howe. Philip Duggan and Connor Grant-Knight have a preview for Cornell. Subscript Law’s graphic explainer is here. In an op-ed for The National Law Journal (subscription or registration required), Richard Cullen and Stephen Bright argue that “[t]he unanimous jury rule is both good law and sound practice.” Additional commentary comes from Aliza Kaplan in an op-ed for The Oregonian. For the ABA Journal, Mark Walsh previews both Kahler and Ramos. The editorial board of the Los Angeles Times urges the court to rule for the convicted defendants in both cases.

Greg Stohr reports at Bloomberg that “[i]n its first full term with two Trump appointees, the court is planning to hear fights over gay and transgender rights, deportation protections and gun regulations,” in addition to an abortion case the justices added on Friday, making the term “a challenging one for Chief Justice John Roberts and his efforts to keep the court as removed as possible from the partisan fray.” Additional coverage of the new term comes from Brent Kendall and Jess Bravin for The Wall Street Journal (subscription required), Shannon Bream and Bill Mears at Fox News, Nina Totenberg at NPR, Richard Wolf for USA Today, David Savage for the Los Angeles Times, and Kevin Daley at The Daily Caller, who reports that the court is facing a “gauntlet of highly polarizing disputes that could make the relative comity of its previous term impossible to replicate.” In an op-ed at The Hill, Elizabeth Wydra writes that the term “is shaping up to be a category 5 political hurricane.” Carrie Severino and Gayle Trotter assert in an op-ed at Fox News (via How Appealing) that the court begins the term “in the face of unprecedented political pressure and threats to its independence.”

On Friday, the court granted five cert petitions, for a total of three hours of oral argument, including petitions in two cases consolidated under June Medical Services v. Gee, a challenge to Louisiana’s law requiring physicians who perform abortions to have admitting privileges at a local hospital. Amy Howe covers the grants for this blog; her coverage originally appeared at Howe on the Court. For The Wall Street Journal (subscription required), Brent Kendall reports that June Medical “marks the first time the Supreme Court will consider the issue of abortion rights since the addition of two Trump appointees, Justices Neil Gorsuch and Brett Kavanaugh.” Additional coverage comes from Shannon Bream and Bill Mears at Fox News, Tony Mauro at The National Law Journal (subscription or registration required), Kevin Daley at the Daily Caller, and Nina Totenberg at NPR. Take Care’s symposium on the case is here. At CNN, Joan Biskupic reports that June Medical “could pose the thorniest challenge” to Chief Justice John Roberts in his quest to establish that “the court is above politics.” At The Economist’s Democracy in America blog, Steven Mazie agrees that “all eyes are on Chief Justice Roberts.”

The justices also agreed on Friday to review U.S. Forest Service v. Cowpasture River Preservation Association, involving the power of the Forest Service to grant rights of way through lands traversed by the Appalachian Trail. For The Washington Post (subscription required), Gregory Schneider reports that “[t]he high court’s intervention could remove a barrier for construction of the $7.5 billion, 600-mile Atlantic Coast Pipeline, which has been halted for nearly a year because of various permitting woes.”

The third case granted on Friday was United States v. Sineneng-Smith, a First Amendment challenge to a federal law making it a crime to encourage or cause illegal immigration for financial gain. At Bloomberg Law, Jordan Rubin reports that “[t]he dispute puts the hot-button immigration issue in front of the justices—with the added complexity of speech and criminal justice implications.”