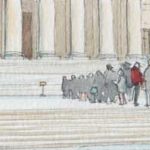 For The Economist, Steven Mazie writes that this “is the case gun-rights advocates have been waiting for since 2008, when the Supreme Court first recognised an individual right to own a gun for self-defence” in District of Columbia v. Heller, which “left many questions unresolved about the Second Amendment’s ‘right of the people to keep and bear arms’: whether there are other ‘lawful purposes’ to own guns, which types of weapons are protected and how far states may go in regulating them.” A mini version of Mazie’s preview is here. Bill Lucia reports at Route Fifty that “[i]t’s an oddball case in a number of ways[:] The restrictions that sparked the court battle are not common around the U.S., and New York City and New York state rolled them back earlier this year after the Supreme Court agreed to hear the case.” At NPR, Nina Totenberg reports that “the first question Monday will be whether the case is moot and should be thrown out because New York has already given the gun owners everything they asked for in their lawsuit.” For The Wall Street Journal (subscription required), Jess Bravin reports that “[w]ith four liberal justices having rejected the premise of the Heller case and four conservatives having voiced unhappiness with the stagnation of Second Amendment doctrine, the focus, as with many divisive issues before the current court, likely will fall on Chief Justice John Roberts.”

The editorial board of the Journal hails the New York case as “an opportunity for the Justices to police their Second Amendment precedents, clarify the standard of judicial review for government infringements, and affirm that gun rights aren’t confined to the home.” Additional commentary comes from Scott Cosenza at Liberty Nation.