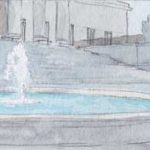 Three days after adding another blockbuster case, involving the president’s ability to fire the director of the Consumer Financial Protection Bureau, to their docket for this term, the justices this morning issued additional orders from their private conference last week. Today’s orders were significantly less eventful. They were perhaps most noteworthy for the fact that the court once again did not act on Indiana’s request to review a state law requiring pregnant women to have an ultrasound at least 18 hours before obtaining an abortion. The justices have now considered the case at six conferences – three in May and three in October – without ruling on it.

The justices turned down a request from Minnesota to review a ruling by the U.S. Court of Appeals for the 8th Circuit holding that the Federal Communications Commission’s policy of not regulating information services supersedes the state’s efforts to regulate VoIP, a tech service that allows phone calls over the internet. Chief Justice John Roberts did not participate in the ruling. Justice Clarence Thomas wrote an opinion agreeing with the court’s decision to deny review that was joined by Justice Neil Gorsuch. Thomas agreed that the state’s case did not satisfy the justices’ normal criteria for review. However, Thomas suggested, in a future case the justices might want to take up the question whether a federal agency’s policy has the stature of a federal “law” that can supersede state laws under the Constitution’s supremacy clause.

The justices also sent a partisan-gerrymandering challenge to maps drawn by Michigan’s Republican-controlled legislature back to the lower court. A federal district court had struck down the maps as unconstitutional, but in June the Supreme Court ruled that courts should stay out of such disputes. In the wake of that ruling, the challengers in the Michigan case acknowledged that the federal courts lack the power to review the case, so today’s order means that dismissal of the challenge is imminent.

The justices’ next conference is scheduled for Friday, November 1.

The post No new grants, no action on Indiana abortion case appeared first on SCOTUSblog.