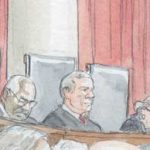 In a succinct six-page opinion, the Supreme Court ruled today in Holguin-Hernandez v. United States that a federal criminal defendant who “advocates for a shorter sentence than the one ultimately imposed” has sufficiently preserved a claim on appeal that a longer sentence is unreasonable, thereby avoiding “plain error” review under Federal Rule of Criminal Procedure 52(b). Justice Stephen Breyer’s opinion for the court was unanimous, although Justice Samuel Alito concurred separately (joined by Justice Neil Gorsuch) to opine briefly on three related issues that the court emphasized it was “not deciding.”

As previewed, Gonzalo Holguin-Hernandez was sentenced to 60 months of imprisonment for a second marijuana distribution offense. That offense also constituted a violation of the conditions of his supervised release from the first offense. At a revocation hearing, the government argued for a further imprisonment sentence within a guidelines range of 12-18 months. Holguin-Hernandez’s counsel argued that no additional time should be imposed, but the district court imposed an additional consecutive 12 months in prison. On appeal, the U.S. Court of Appeals for the 5th Circuit held that Holguin-Hernandez had forfeited his arguments that the 12-month sentence was unreasonable by not stating an objection at the end of the sentencing hearing. Applying the more deferential “plain error” standard of review established in subsection (b) of Rule 52 for errors that were not objected to at trial, the 5th Circuit affirmed the sentence.

Holguin-Hernandez sought the Supreme Court’s review, arguing that the lower courts were wrong to apply the plain error standard, because he had, as subsection (b) of Rule 51 requires, “inform[ed] the court … of the action [he] wishe[d] the court to take,” by asking the judge not to impose additional time. Other circuits have varied in their approaches to Rules 51(b) and 52(b). Because the solicitor general agreed with Holguin-Hernandez’s position on the Rule 51(b) question as applied to substantive sentencing objections, the court appointed an amicus to defend the 5th Circuit’s approach. Breyer’s opinion includes a recitation (in-text because Breyer foreswears footnotes) of the standard compliment: “K. Winn Allen … has ably discharged his responsibilities.”

The court’s opinion is narrow but useful. Rule 52(b) provides that errors “brought to the court’s attention” are not subject to plain error review. Limiting itself to cases in which a defendant has clearly argued for a sentence shorter than the one ultimately chosen, the court makes clear that “[n]othing more is needed to preserve the claim that a longer sentence is unreasonable.” The court states that judges, after hearing an argument for a shorter sentence, “would ordinarily understand” that the defendant objects to any longer sentence as violative of the “parsimony principle enshrined” in the federal sentencing statutes. Because the authors of Rule 51(b) “chose not to require an objecting party to use any particular language,” or “to wait until [after] the ruling to object,” simply arguing for a shorter sentence is enough to preserve the normal appellate “reasonableness review” – as opposed to plain error review — for sentences.

As for “other issues,” such as what is sufficient to preserve procedural objections to a sentencing or whether “particular arguments” are well-preserved for appeal, Breyer says the court “will not consider these matters” because they were not considered by the court of appeals. Holguin-Hernandez’s case is remanded to the 5th Circuit for further consideration, presumably under the normal standards that apply to federal sentencing appeals.

In a two-page concurrence, Alito (joined by Gorsuch) says he wants to “emphasize what we are not deciding.” But Alito goes on to say what he thinks about these undecided questions. First, Alito says that “procedural arguments” won’t be preserved if there is a “fail[ure] to object at all.” Second, “generalized argument[s]” made in the district court will not necessarily preserve “all arguments” for appeal if the specific arguments or facts are not brought to the district judge’s attention. And third, whether “this petitioner” properly preserved certain arguments requires a “case-specific assessment” on remand. Because Alito’s concurrence is joined only by Gorsuch, whether the full court would agree with him on these points is, of course, undetermined.