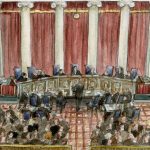 This week we highlight petitions pending before the Supreme Court that address a district court’s discretion to deny a request for a writ of habeas corpus to compel a nonparty inmate to appear as a trial witness and whether solicitation can constitute an “attempt” under the Controlled Substances Act.

Issue: Whether the U.S. Court of Appeals for the 7th Circuit correctly held, in an acknowledged conflict with the U.S. Court of Appeals for the 3rd Circuit, that a district court may deny a request for the issuance of a writ of habeas corpus to compel the appearance of a nonparty inmate as a witness at trial based only upon a consideration as to the inconvenience to the government of making that inmate available to testify and without regard to the importance of the potential witness’s testimony to the case at bar.

Issue: Whether solicitation can by itself constitute an “attempt” within the meaning of the Controlled Substances Act.