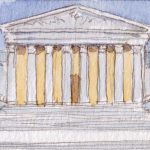 Late Thursday afternoon, the first case arising out of a subpoena dispute involving President Donald Trump reached the Supreme Court when the president’s personal lawyers filed a petition for a writ of certiorari in Trump v. Vance. But whereas the Vance case raises interesting questions about when the president can be sued in state court, it is likely to be overtaken in importance by other subpoena disputes making their way to the court—including the dispute over the House Oversight Committee’s subpoena to the Mazars accounting firm, in which the D.C. Circuit denied rehearing en banc on Wednesday, and in which a stay application may be filed with Chief Justice John Roberts as early as today.

The Vance case arises out of a subpoena issued by New York County (Manhattan) District Attorney Cyrus Vance to Mazars for financial records as part of an ongoing state grand-jury proceeding that, as the U.S. Court of Appeals for the 2nd Circuit explained, “is investigating whether several individuals and entities have committed criminal violations of New York law.” As part of that investigation, Vance served a subpoena on Mazars in late August 2019 for “a wide variety of financial records dating from January 1, 2011 to the present and relating to the President, the Trump Organization, and several related entities.” That includes any “[t]ax returns and related schedules, in draft, as-filed, and amended form” within Mazars’ possession.

On September 19, Trump filed suit in federal district court in New York seeking to bar Mazars from complying with the subpoena. At the heart of the complaint are two related arguments: that, because the president cannot be criminally indicted while in office, he is absolutely immune from criminal process during the same time period; and that, at the very least, the supremacy clause of the Constitution bars state courts from issuing such process.

On October 7, U.S. District Judge Victor Marrero ruled against Trump on two alternative grounds. First, Marrero concluded that Trump’s request for a federal injunction of an ongoing state criminal investigation was barred by “Younger abstention”—which generally limits the ability of federal courts to block state criminal proceedings once they have begun. Second, and in the alternative, Marrero held that Trump was not entitled to an injunction because he could not demonstrate a likelihood of success on the merits.

After Marrero’s ruling, the parties entered in agreement under which, in exchange for Vance’s promising not to enforce the subpoena pending appeal, Trump agreed to strict time limits for pursuing such relief. Consistent with that agreement, Trump promptly appealed to the 2nd Circuit, which held argument on October 23 and ruled on November 4. Writing for a unanimous three-judge panel, Chief Judge Robert Katzmann rejected the first ground on which Marrero had relied, holding that Younger abstention did not apply. But he affirmed the denial of Trump’s motion for an injunction, agreeing that the president had not demonstrated a likelihood of success on the merits. As he noted, “The President has not persuasively explained why, if executive privilege did not preclude enforcement of the subpoena issued in [United States v.] Nixon, the Mazars subpoena must be enjoined despite seeking no privileged information and bearing no relation to the President’s performance of his official functions.” Moreover, Katzmann continued, “we are not faced, in this case, with the President’s arrest or imprisonment, or with an order compelling him to attend court at a particular time or place, or, indeed, with an order that compels the President himself to do anything. The subpoena at issue is directed not to the President, but to his accountants; compliance does not require the President to do anything at all.”

As for the president’s argument that the supremacy clause bars state courts from issuing subpoenas that might be permissible in federal court, Katzmann again focused on the specific subpoena at issue: “while the President may be correct that state courts lack the authority to issue him orders—a question we have no need to address today—that provides no basis to enjoin the enforcement of a subpoena issued to a third party simply because the President is implicated in the subject matter of the investigation.” The court concluded:

We emphasize again the narrowness of the issue before us. This appeal does not require us to consider whether the President is immune from indictment and prosecution while in office, nor to consider whether the President may lawfully be ordered to produce documents for use in a state criminal proceeding. We accordingly do not address those issues. The only question before us is whether a state may lawfully demand production by a third party of the President’s personal financial records for use in a grand jury investigation while the President is in office.

The agreement between Vance and Trump gave the president 10 days from the filing of the 2nd Circuit’s decision to petition the Supreme Court for certiorari. Those 10 days expired yesterday.

The petition filed in the Supreme Court describes the case as presenting far broader questions than those the 2nd Circuit stated it was deciding. In its opening sentence, the brief asserts that “[f]or the first time in our nation’s history, a state or local prosecutor has launched a criminal investigation of the President of the United States and subjected him to coercive criminal process.” The central argument against the decision below is the claim that the subpoena “violates the absolute immunity that the President holds from state criminal process while in office.” In essence, the president’s personal lawyers are framing the subpoena as raising the very question the 2nd Circuit stated that it had not considered—whether the president himself can be subjected to coercive criminal process by a state court. Although the Supreme Court in Clinton v. Jones held that a sitting president could be subjected to coercive civil process so long as it related to conduct predating his tenure in office, it expressly reserved whether such process could also be issued by a state court, or whether only federal courts had such authority.

Under the parties’ agreement, Vance has seven calendar days to file a brief in opposition to the petition, and Trump has three calendar days to reply—meaning that the briefing on the cert petition should be complete by Monday, November 25. That timing is important because it would presumably allow for the petition to be distributed for the justices’ conference on December 13—the last time the justices will vote on new cases before the Supreme Court’s informal winter recess. (The next conference after December 13 is four weeks later—on Friday, January 10, 2020.) If the justices were inclined to take up the president’s appeal, that would allow the case to be fully briefed and argued during the court’s current term, with a decision by the last week of June.

A complicating factor is the other major subpoena dispute that is, by all accounts, about to reach the Supreme Court—the president’s effort to block a congressional subpoena to Mazars. Unlike the Vance case, the ruling of the U.S. Court of Appeals for the District of Columbia Circuit in the House Oversight Committee case (Trump v. Mazars USA, LLP) decided a far broader question about Congress’ subpoena powers, and thus has far more significant ramifications for other ongoing disputes than the Vance case, which is necessarily limited to the unique posture of a state investigation. And unlike in the Vance case, there’s no agreement between the parties to stay enforcement of the subpoena pending appeal. With the D.C. Circuit’s mandate set to issue next Wednesday, Trump’s lawyers have suggested that they will seek a stay of that decision as early as today. If that happens, it is likely that the justices will end up voting at least on whether to stay the D.C. Circuit’s decision in the Mazars case before they decide whether to take up the Vance case on the merits.

Thus, even though the Vance case is the first to reach the Supreme Court, it may not be the first to produce at least an interim decision from the justices. And given the very different questions the two cases present, the court’s disposition in Vance is likely to be not nearly as significant as its disposition in Mazars.