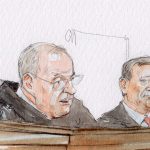 Mark Rienzi is President of the Becket Fund for Religious Liberty, a law professor at The Catholic University of America, Columbus School of Law, and a visiting professor at Harvard Law School. He is counsel in many of the cases described below, either for a party or as an amicus. The views expressed here are his own, not those of his employers or clients.

With respect to religious-liberty litigation, October Term 2018 represented the calm before the storm. Its main feature was a major establishment clause decision that significantly clarified the law concerning religiously inspired public monuments. And the Supreme Court gave several indications that it will be active on free-exercise issues next term, particularly in cases in which the court’s own doctrine is creating real harm. This is not surprising, as the broader societal valence of religious-liberty conflicts has not abated, and many of the major precedents in the field (such as Lemon v. Kurtzman and Employment Division v. Smith) have created disequilibrium in the law and uncertainty for litigants. Ongoing social conflict and unstable precedent are a recipe for a stream of cases reaching the court, at least until the social conflict ebbs or the court’s decisions create a new doctrinal equilibrium.

The Supreme Court’s only merits decision in this area was its 7-2 reversal in American Legion v. American Humanist Association, upholding a World War I memorial cross against an establishment clause challenge. The U.S. Court of Appeals for the 4th Circuit had applied the court’s much-maligned Lemon test to find the cross illegal, but a broad majority of the Supreme Court disagreed. Seven justices agreed the cross is constitutional. Six justices, across two opinions, agreed that Lemon should not control at all.

The Supreme Court expressed particular concern about the possibility that its doctrine could be employed in a way that would cause harm and discord. The court explained that the religion clauses, after all, aim to “foster a society in which people of all beliefs can live together harmoniously.” And the court would not allow the lower courts’ use of the Lemon test to lead to “tearing down monuments” because that would “strike many as aggressively hostile to religion.”

Both doctrinal problems cause real-world harms, and both are presented in petitions for certiorari the Supreme Court will consider as soon as this fall. Ricks v. Idaho Contractors Board challenges Smith’s narrow conception of free exercise, asking whether the state can rely on Smith to deny an exemption to an applicant for a contractor’s license with religious objections to using his social security number when the state has many other ways to identify him. The court could also revisit or narrow Smith in Fulton v. Philadelphia, in which the U.S. Court of Appeals for the 3rd Circuit relied on Smith to uphold Philadelphia’s efforts to close a Catholic foster-care agency that said it could not endorse and partner with same-sex couples or unmarried heterosexual couples as foster parents and would instead refer them to other agencies. Patterson v. Walgreen, Co., which concerns a Seventh-day Adventist who was fired from Walgreens because he could not attend a training session on his Sabbath, offers the court an opportunity to correct the “undue hardship” standard established in TWA v. Hardison.

Fulton can also be viewed not just as a result of Smith, but also as a result of Obergefell v. Hodges and perceived loose ends from Masterpiece Cakeshop v. Colorado Civil Rights Commission. In his Obergefell dissent, Chief Justice John Roberts noted presciently:

Hard questions arise when people of faith exercise religion in ways that may be seen to conflict with the new right to same-sex marriage—when, for example, … a religious adoption agency declines to place children with same-sex married couples. … There is little doubt that these and similar questions will soon be before this Court. Unfortunately, people of faith can take no comfort in the treatment they receive from the majority today.

Four years later, the chief justice’s prediction has come true, and Fulton will test the Obergefell majority’s promise of a live-and-let-live system in which the government does not get to impose a single definition of marriage and make those who dissent into “outlaws” or “outcasts” for living by the less-favored view. The Supreme Court may have other opportunities to revisit Masterpiece as well, with a petition for certiorari expected this summer in Arlene’s Flowers Inc. v. Washington, which the court had previously sent back for reconsideration in light of Masterpiece.

Although questions related to religious liberty and the death penalty were not on the merits docket, the Supreme Court also showed some development of its religious-liberty thinking over two emergency orders on its shadow docket. In Dunn v. Ray, the court wrongly failed to uphold the claim of a Muslim inmate to have his spiritual leader present during his execution. Justice Elena Kagan issued a strong dissent joined by three colleagues, arguing that “given the gravity of the issue,” the Ray decision was “profoundly wrong.” Although some suggested the court’s rejection of Ray’s claim reflected a bias against non-Christian plaintiffs, that argument is hard to square with the court’s recent 9-0 and 8-1 religious-liberty decisions in favor of Muslim religious liberty plaintiffs in the prison context (Holt v. Hobbs) and employment context (Equal Employment Opportunity Commission v. Abercrombie & Fitch Stores Inc.). And just a few weeks later, in Murphy v. Collier, the court got the issue right, blocking the execution of a Buddhist prisoner unless the state allowed a Buddhist spiritual adviser to be present. Kavanaugh, concurring, emphasized that “governmental discrimination against religion … violates the Constitution.”

The justices also granted certiorari in Espinoza v. Montana Department of Revenue, to consider whether Montana may shut down a neutral student-aid program simply because its beneficiaries may choose to attend religious schools. The case gives the Supreme Court an important opportunity to solidify and expand upon its decision in Trinity Lutheran Church of Columbia Inc. v. Comer, and to clarify that state constitutional “Blaine Amendments” that exclude religious groups from equal participation in government benefits are impermissible. A few months before the Espinoza grant, this issue was foreshadowed in Kavanaugh’s statement respecting the denial of certiorari in a historic-preservation case, Morris County Board of Chosen Freeholders v. Freedom From Religion Foundation. Joined by Alito and Gorsuch, Kavanaugh wrote that exclusion of religious organizations from equal participation in a government program “simply because they are religious” is “pure discrimination against religion.” Espinoza now gives the court the opportunity to squarely address such discrimination in the school-funding context next term.

It is also likely that the Supreme Court will need to revisit the contraceptive-mandate litigation a final time during the 2019 term. Although the court in 2016’s Zubik v. Burwell sent the matter back to the lower courts so the parties could reach an agreement, the lower courts have not cooperated with that plan, instead issuing multiple nationwide injunctions to prevent any new resolution from taking effect. These injunctions have been entered in new cases brought by 21 different states, which say that the agencies actually have no power to issue religious exemptions at all, and that exemptions for groups like the Little Sisters of the Poor will harm state governments. The injunctions have essentially locked the parties into the litigation as it stood when the Supreme Court last granted certiorari in 2015. A certiorari petition will likely arrive at the court in late summer or early fall.

Of course, not all the cases headed toward the Supreme Court are the result of unclear doctrine. Although most circuits have carefully followed the court’s unanimous 2012 decision Hosanna-Tabor Evangelical Lutheran Church & School v. EEOC on the freedom of religious groups to choose who will teach and exemplify the faith, the U.S. Court of Appeals for the 9th Circuit has not. This recently prompted nine judges on that court to remark that “three times in the last two years, we have departed from the plain direction of the Supreme Court.” Two of those cases, Biel v. St. James Catholic School and Morrisey-Berru v. Our Lady of Guadalupe, will likely arrive in certiorari petitions this summer. And the court is also expected to rule on a petition from the Archdiocese of San Juan in a case in which the Supreme Court of Puerto Rico remarkably held that the establishment clause required it to treat all Catholic institutions on the island as a single entity.

In many of the cases discussed above, a common thread is that harm is occurring either because of longstanding doctrinal problems (Lemon, Smith, Hardison) or the Supreme Court’s more recent inability to fully resolve an important question (Masterpiece, Zubik). While the justices may have hoped that decisions like Masterpiece and Zubik would allow parties to reach sensible live-and-let-live solutions, the unfortunate truth is that the political potency of hot-button issues will encourage continued efforts to take advantage of gray areas left by the court. In short, in this area of the law unsettled doctrine abets social conflict.

Thus, if the religion clauses are to fulfill their important role of helping to build a diverse society “in which people of all beliefs can live together harmoniously,” the justices will need to continue their efforts to improve doctrine and provide final resolutions to longstanding doctrinal controversies.

The post Symposium: The calm before the storm for religious-liberty cases? appeared first on SCOTUSblog.