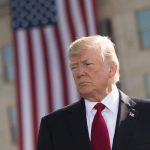 Late last month the Supreme Court agreed to put on hold a ruling by the U.S. Court of Appeals for the District of Columbia Circuit that upheld a subpoena for President Donald Trump’s financial records. The justices ordered lawyers for Trump to file a petition for review of the D.C. Circuit’s decision by noon today. In their 38-page filing today, Trump’s lawyers urge the justices to take up what they describe as the “profoundly serious constitutional questions” presented by the president’s case and reverse the lower court’s ruling, shielding the records from Congress.

The subpoena at the heart of the case came from the House Committee on Oversight and Reform, which is seeking several years’ worth of Trump’s financial documents and records from Mazars, Trump’s long-time accounting firm. The committee said it wanted the documents as part of its investigation into government ethics and conflicts of interest in the executive branch. That investigation, the committee said, includes “the accuracy of statements made by President Trump on various financial disclosures.”

Trump went to federal court to try to keep Mazars from turning over the documents to the committee. He argued that the subpoena does not serve a “legitimate legislative purpose” and therefore exceeds Congress’ power, but the lower federal courts upheld the subpoena. Trump then came to the Supreme Court last month, asking the justices to put the lower court’s ruling on hold to give him time to file a petition for review of the merits of the D.C. Circuit’s decision. Without a stay, Trump contended, Supreme Court review and even an eventual victory would be hollow, because Mazars would have turned over the documents already – and his confidential information would inevitably be revealed. The justices granted Trump’s request, setting today as the deadline for him to file his petition for review.

Under the D.C. Circuit’s decision, Trump complains, Congress now has nearly free rein to seek the president’s financial records, as long as it can say it is considering legislation “that might require presidents to disclose that same information.” “Given the obvious temptation to investigate the personal affairs of political rivals,” Trump warns, “subpoenas concerning the private lives of presidents will become routine in times of divided government.”

“At its core,” Trump summarizes, his case is about “whether – and to what degree – Congress can exercise dominion and control over the Office of the President.” And the D.C. Circuit’s decision cannot stand, Trump continues, because it is wrong. As an initial matter, Trump reasons, the subpoena lacks the kind of “legitimate legislative purpose” that the Supreme Court has said is necessary. Instead, the committee was trying to uncover wrongdoing by Trump. And in any event, Trump adds, the court of appeals ruled that the only kind of legislation that the subpoena could have contemplated was legislation that would require presidents to disclose personal financial information. But such legislation, Trump asserts, would exceed the power that the Constitution gives Congress.

This petition may not even be Trump’s only filing at the Supreme Court today involving his financial records. Yesterday the U.S. Court of Appeals for the 2nd Circuit, based in New York, upheld a House subpoena to Deutsche Bank for Trump’s financial records, and Trump’s lawyers have indicated that they could ask the justices to put that ruling on hold as early as today. Trump has also asked the justices to review a ruling by the U.S. Court of Appeals for the 2nd Circuit that would require him to turn over tax records to Manhattan’s district attorney, who seeks them as part of a grand-jury investigation. The justices are scheduled to consider the latter petition at their private conference on December 13. It’s not clear whether they will consider today’s petition at the same conference, but Trump assured the justices that he is “ready to proceed on any schedule the Court deems appropriate should it grant” review. If the justices do grant review and hear argument during the current term, a decision would come by late June – in the middle of the 2020 presidential campaign.

This post was originally published on Howe on the Court.