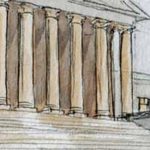 Yesterday the Supreme Court released the calendar for the February argument session, which begins on February 24, 2020, and runs through the first week in March. Amy Howe covers the announcement for this blog, in a post that first appeared at Howe on the Court. She reports that “[t]he highest-profile cases of the sitting will come at the end of the session: On March 3, the justices will hear argument in the challenge to the leadership structure of the Consumer Financial Protection Bureau, followed by argument on March 4 in the dispute over the constitutionality of a Louisiana law that requires doctors who perform abortions to have the right to admit patients at a nearby hospital.”

For The Washington Post (subscription required), Robert Barnes and Ann Marimow report that “[t]he legal cases concerning President Trump, his finances and his separation-of-powers disputes with Congress are moving like a brush fire to the Supreme Court, and together provide both potential and challenge for the Roberts court in its aspiration to be seen as nonpartisan.” Nina Totenberg discusses the cases at NPR (audio and transcript). At Balkinization, Marty Lederman addresses “the importance of the … cases[,] the weakness of Trump’s constitutional arguments … and … what the Court is likely to do with those two cases.”